As of December 2015, sow stalls are banned and no longer legal. Watch our victory video.

The dry sow stall is a small metal-barred crate that was widely used on New Zealand factory farms. A sow stall is about 60 centimetres wide and 2 metres long – just a fraction bigger than the sow herself.

A sow is confined in the stall for the first four weeks of her 16-week pregnancy. In these stalls, sows do not even have enough room to turn around, let alone exercise. Usually, no bedding materials are provided. The uncomfortable concrete floor and lack of exercise can cause weak bones and muscles, abnormalities in bone and muscle development, urinary tract infections, and heart problems. Living in such a barren environment also leads to boredom, frustration and aggression. Pigs in sow stalls often exhibit repetitive, unnatural behaviour such as biting the metal bars of their cages. Experts regard this behaviour as a sign that the pigs are under stress and suffering. 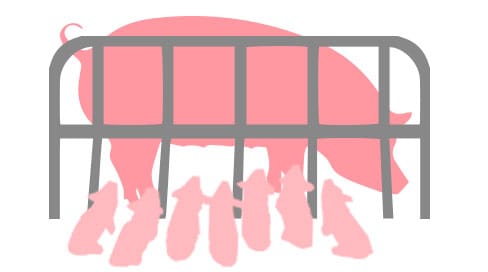 At the end of her pregnancy, the sow is placed in a farrowing crate where she will give birth. As in the sow stall, she can only stand up and lie down. With no straw for bedding, she scrapes her nose over the bare floor in an attempt to build a nest for her piglets. Her inability to properly mother her piglets only adds further to her frustration and depression. Her piglets will be taken away at a mere four weeks of age. The grieving sow will be impregnated again almost immediately, kept in a small pen, to be returned to the crate a few days before giving birth where the cycle of abuse continues. 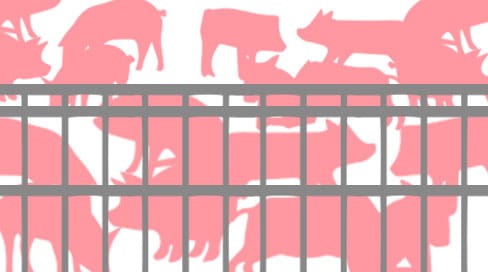 The piglets born from crated mothers are the animals killed to become the pork products that end up in supermarkets and on summer BBQs. The majority of the approximately 660,000 pigs farmed and killed each year in New Zealand come from sows that have been housed in farrowing crates.

Separated from their mothers, piglets spend the remainder of their short lives crammed inside dark, overcrowded pens on concrete or wooden-slatted floors. The piglets are unable to roam, play or dig, as they would do naturally outdoors. Pigs have very clean toilet habits. In nature, they prefer to never defecate near where they eat or sleep. In factory farms there is no room for this; the piglets are forced to sit or lie in their own excrement within a barren pen. The young pigs are slaughtered at around five months of age.

The stress of living under such harsh conditions causes many piglets to attack their pen-mates and they often bite each other’s tails. This can lead to more serious forms of cannibalism. Instead of giving them more room, farmers cut off the piglets’ tails. In the vast majority of cases, without anaesthetic.