Our work Animals in Aotearoa Chickens bred for meat

Chickens bred for meat have been selected to grow explosively fast, and their bodies just can’t keep up, many dying even before they reach the six-week point when they are killed. Chickens like these are sick and deformed (SAD); they are bred to be non-survivors.

Find out how you can help chickens right now and be kept informed of ways you can help these birds in the future.

Life as a chicken used for meat

These birds (often referred to by the poultry industry as ‘broilers’) have been selectively bred for their meat, rather than eggs. They are completely separate breeds from those used for egg laying.

The majority are housed in large, windowless sheds holding around 40,000 birds. The floor covering (litter) is only changed when the birds are removed for slaughter at around six weeks. This causes urine and faeces to build up in the litter, resulting in high ammonia levels in the air and burns to the soles of the chickens’ feet and ankle joints (hocks).

Birds are packed closely together, especially in their last weeks, and have little space to move. The legal maximum stocking density is 38kg per square metre, (which equates to 19 birds per square meter), giving each bird a floor area of less than the size of an A4 sheet of paper.

As the birds grow, conditions deteriorate and the sheds become increasingly overcrowded. They must constantly compete to reach food and water supplies. Antibiotics are routinely fed in an attempt to prevent diseases that can spread in these poor conditions.

In New Zealand, all farmers breed Cobb and Ross chickens, both of which have been selectively bred over many generations to put on weight very quickly. They double in size every week, reaching the desired slaughter weight of about 2.5kg at only about six weeks of age. Chickens would normally take six months to fully mature.

Horrifyingly, the net effect of this fast growth is that the industry has made a breed of bird that has severe health problems and is a ‘non-survivor’. This means that if any of these birds were fortunate enough to be rescued and allowed to live naturally, they usually would not survive past one-year-old due to their poor genetic disposition.

Having been bred to grow overweight so rapidly, they experience severe stress on their hip and leg joints, affecting their ability to walk. At 5-6 weeks of age, they spend most of their time lying down.

The catching and transport of birds prior to slaughter can cause considerable pain and distress. Each catcher will carry as many as four birds by their legs in each hand, then attempt to cram them into small crates, which are then loaded onto trucks.

Dislocated hips, broken wings and legs, and bruising are common occurrences. The usually rough process of catching, loading, transport and unloading, can cause serious injury and even death to a significant number of chickens.

The majority of chickens are slaughtered at just six weeks of age – although some free range farms kill at twelve weeks. (A chicken’s natural lifespan is around eight years.) These deformed babies are still peeping like chicks, because they still are.

On reaching the slaughterhouse, chickens are removed from their crates and shackled upside down by their feet on a moving line whilst still fully conscious. Their heads and neck are dragged through an electrically charged water bath designed to stun the birds, rendering them unconscious. The moving line then takes the birds to an automatic neck cutter. Birds are then bled before entering a scalding tank to make plucking easier. Chickens often experience pain and struggle while hung in shackles, especially when they’ve had their legs broken. This can lead to birds not being properly stunned and having their necks cut while fully conscious.

Thousands of birds also die every day in New Zealand poultry sheds as a result of heart failure, disease and afflictions caused by intensive methods of production. Birds crippled and deformed can die of starvation or thirst, unable to reach food or water.

Chickens are hatched from eggs laid by parent birds. These parent birds are usually housed in sheds in smaller groups. Their food intake is restricted by the farmers, which can lead to severe hunger. This is done to prevent them from growing as fast as the chickens reared for meat. If their growth is not controlled, they would be unlikely to survive to sexual maturity.

The free range market comprises less than two per cent of the industry.

The birds chosen are the same ‘fast-grow’ breeds used on conventional farms, so they suffer similar explosive growth and high prevalence of painful lameness, joint collapse, respiratory and heart problems.

There are also no industry standards or regulations for free range, only that there must be a potential to access the outdoors. Since most free range chickens are  slaughtered at only six weeks old, the amount of time they actually get to go outside is only two-three weeks. Prior to that, they are shut in the shed. In practise, many may never get out because they have to potentially get past thousands of other birds to reach the limited number of ‘pop holes’. 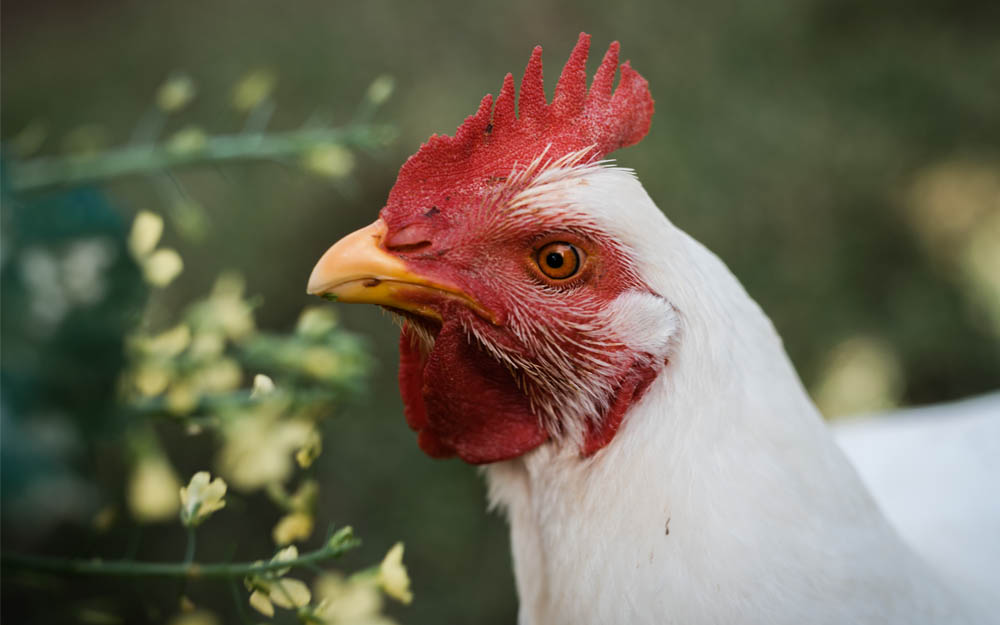 Womble and Bumble were lucky. At just four weeks of age, they were already the size of adult chickens and their explosive growth was making it hard to stand up. SAD chickens like these are so top-heavy many fall onto their backs and are unable to get up. Womble and Bumble were found in this state, close to death.

But they were rescued and after receiving extensive veterinary treatment, they went to a forever home at a sanctuary.

The SAD chickens are bred for extremely fast growth. This leads to severe health problems including heart failure and lameness, which leaves huge numbers of them in chronic pain and with reduced ability to move. As a consequence, chickens bred for meat have, potentially, the most miserable lives of any farmed animals in New Zealand.

After several months at the sanctuary, Bumble suffered a neurological condition that meant she was unable to walk unaided. A special chicken therapy chair was secured, and she received daily laser treatment in an attempt to regain her movement. However, despite the best possible care for her disability, she recently succumbed to symptoms of congestive heart failure.

Womble, however, is still alive and living her best life at a sanctuary.

Take action: Find out how you can help chickens right now and be kept informed of ways you can help these birds in the future.