Zoochosis: Why animals should not be in zoos

Death comes to us all, and the most we can hope for (to quote Kenny Rogers) is to die in our sleep. I’d like to think that we can raise our expectations a little higher than that. Personally, I would like to have a life worth living and dying for.

But we don’t all get that chance. Consider the recent death of Tongki. Tongki died on 17th October 2018. Tongki was a beautiful and tormented polar bear who lived for 21 of his 24 years in a concrete pen in a zoo called Everland in South Korea. Well, a theme park that contains a zoo, to be more precise. The point is, Tongki’s life was all about entertaining humans. 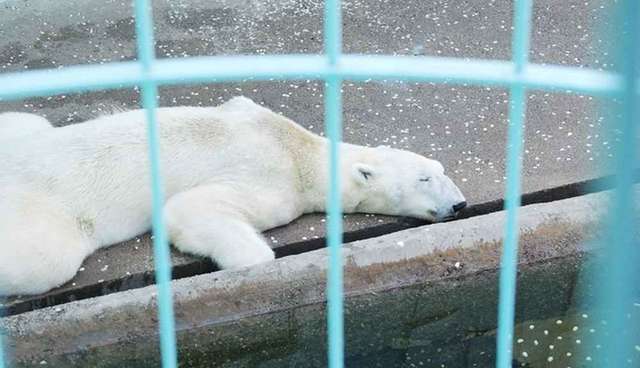 Tongki reached a fairly respectable age for a polar bear, who often only live for 15-18 years in the wild.

But the question is – was it a life worth living? He had to endure hot and humid Korean summers with limited physiological means of keeping himself cool. Tongki would spend hot days lying motionless in a zoochotic* state. He engaged in head bobbing.

Everland was heavily criticized by animal rights group Coexistence of Animal Rights on Earth (CARE). CARE visited Tongki in 2012 and found him in a small pen in 30-degree heat, with a drained pool with a broken thermometer. A petition was circulated asking Everland not to import any more polar bears and to improve Tongki’s living conditions.

Tongki was going to be moving to a British wildlife park in a few days to live his final years in peace and cooler temperatures. But he died instead. I’m not sure if it was in his sleep – it hardly seems relevant anymore. If you don’t have a good life, does a good death matter?

Polar bears are particularly vulnerable to poor welfare outcomes in zoos. They have a natural range that can be one million times larger than their zoo pen.

Zoos can get a very bad rap from situations like this. They position themselves as having admirable goals such as conservation, education and research. Good animal welfare is regarded as crucial by the better zoos in achieving these ends.

So, should we throw the proverbial baby out of the bath water just because some zoos have poor animal welfare and zoochotic animals? Is there a case for closing zoos?

In my opinion, we should close all zoos and put the animals in sanctuaries with rewilding schemes. We need to learn to respect animals on their own terms and not ours. Take, for example, the beautiful giraffe Marius at Copenhagen Zoo. He was killed in 2014 because his genes were overrepresented in the gene pool of giraffes.

That is often the problem when animal conservation meets animal welfare. In conservation, animals become reduced to species who play a vital part in an ecosystem. Healthy ecosystems have a rich diversity of animals, plants and genes. Marius had just too much sameness about him.

Marius, according to the Copenhagen Zoo, was not Marius at all. Naming him confuses the issue. It turned out he was nothing more than a spotted bag of genes with a long neck.

So why not use him for educational purposes and cut him up to give pre-school and school children a lesson in giraffe anatomy.

Yes, Marius was dismembered in front of school children. And this is just another incident of zoos going horribly wrong.

And who can forget the killing of the gorilla called Harambe at Cincinnati Zoo in 2016? Harambe was incarcerated and unable to defend himself from people’s opinions when a 3-year-old child literally dropped from the sky into his enclosure.

A zookeeper shot and killed Harambe. In his death, he became an internet sensation and the subject of computer games and memes.

Harambe, Marius and Tongki. They were given beautiful names for our entertainment. They all paid the ultimate price for our disrespect. We owe so much more to animals – compassionate coexistence and respect would be a first step.

Let’s consider conserving their habitats instead of destroying them. Animals have a right to live a life worth living just as much as we do.

*Zoochosis is the term used to describe the stereotypical behaviour of animals in captivity. This includes physical and mental frustration and abnormal behaviour, such as pacing, rocking backwards and forwards and self-mutilation.