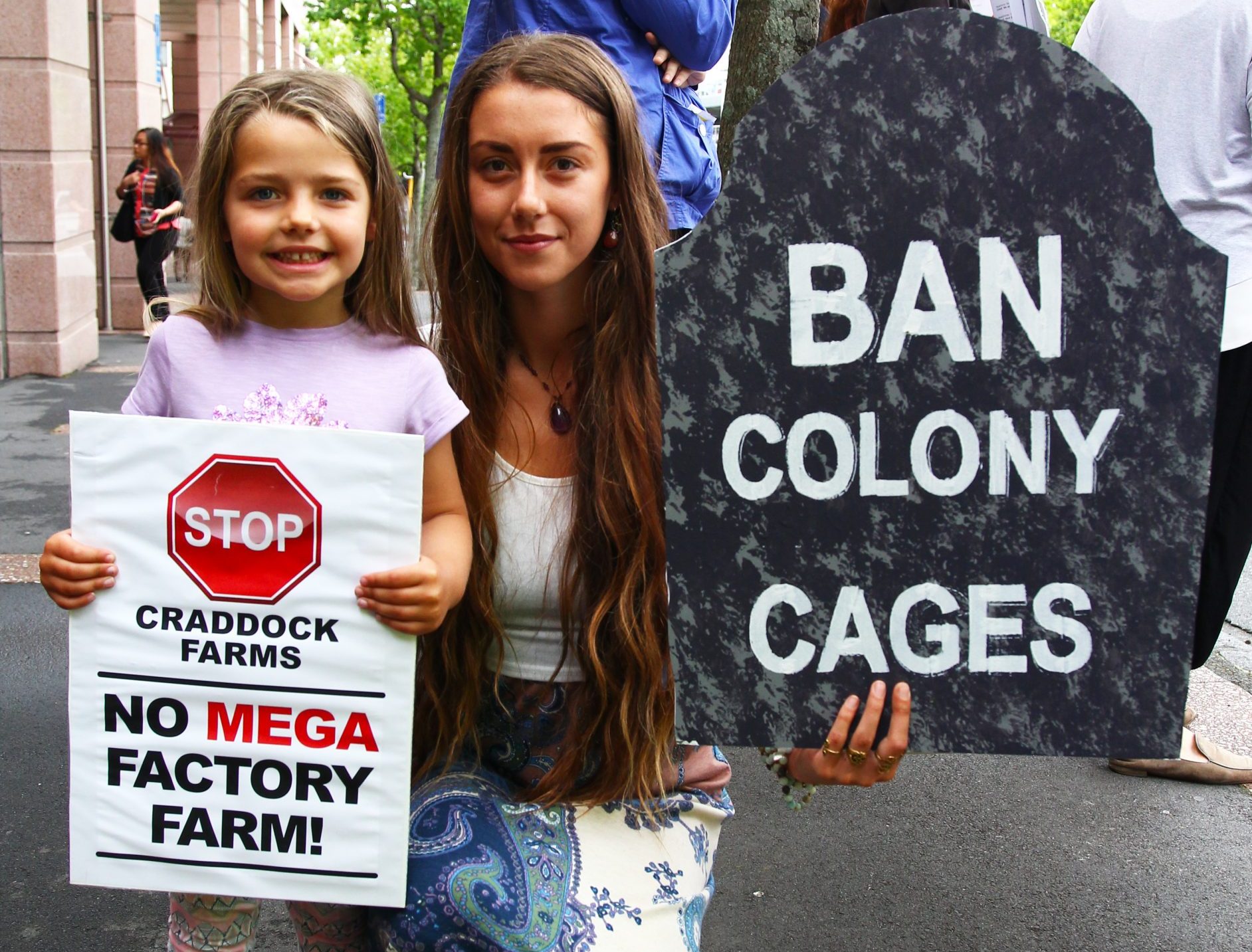 When unlikely allies come together to fight intensive farming

Back in 2014, I was contacted by some fellow animal activists who told me a woman had reached out to them for help to stop a colony cage egg farm from being built in her small rural township of Patumahoe by a company called Craddock Farms.

Knowing that I’d always been passionate about freeing hens from cages, they asked me if I would consider taking it on. Would I help this woman fight to stop what would have been at the time the biggest colony cage farm in Aotearoa from being built? My answer was almost immediately, “Hell yes, I will!”

The next step involved driving out from the city to meet the woman to hear her side of the story and to see how we could work together against a big company with plenty of money to throw around.

I met Peta for the first time at her house on a rainy weeknight, together with another animal activist. She had made us dinner and it was vegan, even though she wasn’t vegan at the time (she is now). We talked that night about what she was up against, what she had set in motion already and how I thought I could help her.

At the time, I wasn’t daunted at all by the size of the task, who we were going up against or the amount of money they had to throw at court cases and appeals. I just wanted to stop over 300,000 hens from being confined to cages, and the establishment of a colony cage industry in our country. I also wanted to help a rural community fight back against a company that thought it could steamroll its way into their small township.

I went home that night after meeting Peta and started to plan a campaign. With the help of a flatmate and another friend, “Stop Craddock Farms” was born. I researched the company as a first step and found out that the Craddock brothers, who ran the day-to-day operations of Craddock Farms, were funded by Walter Yovich, a wealthy investor based in Whangārei. This man had a wealth-management business located on one of the main streets of Whangārei, with lots of branded signage and right on a public footpath ‒ the perfect spot for a protest!

I sat in my bedroom and created a Facebook event for the first protest outside Walter Yovich’s office, hoping and wondering if anyone would show up. And they did! Around 40 people attended the first protest, a good mix of Whangārei locals and others who had travelled up from Warkworth and Auckland. Over the next year we held several well-attended protests outside Yovich’s office, with coverage from local media and support for the campaign growing all the time.

While I worked on protests, media coverage and other tactics like a petition to Yovich that gained over 10,000 signatures, Peta worked within her community, holding regular public meetings, awareness-raising stalls and most importantly, by fighting the proposed colony cage farm within the system ‒ first through a hearing at Auckland Council, which declined Craddock’s proposal, and then through the Environment Court when Craddock Farms appealed the Council’s decision.

In the end, we won. By working together, we stopped Craddock Farms from building their mega colony cage farm in the small township of Patumahoe. This was in 2016 and since then it’s been sad to see that a number of even bigger colony cage farms have been built around Aotearoa. And puzzling too, considering that supermarkets in our country have committed to phasing out all caged eggs by at 2027 or earlier.

What we need now is for our country’s leaders to step up and do their bit. We’ve had promises from both the Greens and the Labour Party that they will phase out factory farming, starting with the worst aspects like cages for hens and pigs. Now we need action.

In September, Kiwis will vote for who they want to see in Government to take us through the next three years ‒ an uncertain time, with a global pandemic knocking at our door.

I sincerely hope that for the millions of hens trapped in cages in our country, we get these kinds of leaders. And on a personal note, I would like to see hens freed from cages within my lifetime.

Deirdre Sims is a campaigner for the animal advocacy organisation Direct Animal Action.

Pictured above: Grace Bell and her daughter Ruby at a Stop Craddock Farms protest.

If you too want to see hens freed from cages, we need your help.

Help hens this election. Contact your MP and ask them free hens from cages.