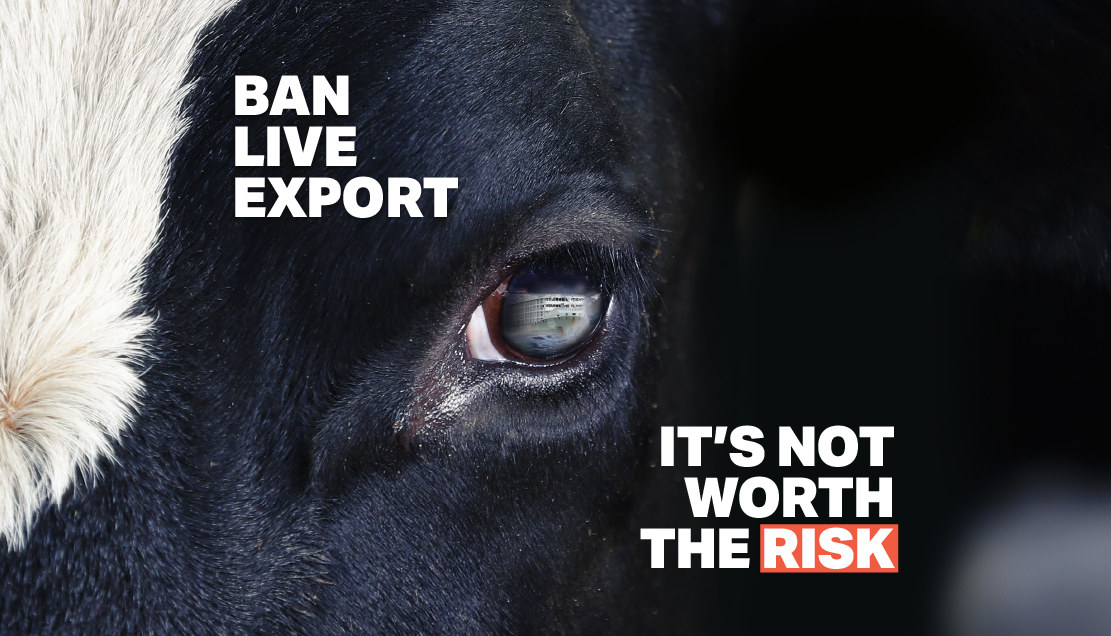 This virtual event has already taken place. You can watch the full video on our Facebook page!

If you didn’t get a chance to join the protest, watch the full video here.

Following the tragic sinking of Gulf Livestock 1 and the loss of 41 crew members and 5,867 cows, it’s time to end live export from New Zealand once and for all. This tragedy highlights the dangerous risks of live export for both people and animals. After calls to end this cruel trade, New Zealand has temporarily halted the live export of cows. This is a positive step, but we need to go further and make sure that live export is banned permanently. Live export is not worth the risk.

The protest will run for 65 minutes, to represent the 65 thousand cows who have been exported this year. The protest will take place on Zoom. All the info you need to join via Zoom will be sent to you in an email before the event.

The eyes of the world are on New Zealand. Let’s use people power to end this cruel trade in animals.

New Zealand exports live animals despite the associated risks. Once the animals leave our shores, we lose control over their welfare. These sentient land animals are forced to endure weeks of dangerous travel at sea. The majority are sent to countries with lower animal welfare standards than New Zealand or no legal protection at all. Live export is not worth the risk.

Join our protest and help get a permanent ban on live export in New Zealand.

Just like a regular protest, we want to see some creative protest signs. We will be taking a photo of everyone with their signs, so make sure to whip something up beforehand. You can use “New Zealand Live Export – It’s Not Worth The Risk” or come up with your own message.

We’ll be taking lots of action online during the protest, so get ready to make some noise on Twitter and Facebook. Twitter is a great way to make your voice heard. If you haven’t got a Twitter account, it’s super easy to set one up. If you prefer, you can just keep your Twitter account for your animal activism. We want the New Zealand Government to hear our message loud and clear, so the more people that take part in our online actions the better.

There will be guest speakers and live interviews during the protest, (scroll on for more details!)  Keep an eye on our Facebook event for more exciting announcements.

Anyone who turns up to the protest and takes part for the full 65 minutes is in the draw for a special prize. The winner and prize will be announced live at the end of the protest, so you don’t want to miss it.

We can all still stand up for animals together from home, so get your chanting voice ready, invite your friends and whānau and see there you on Wednesday. 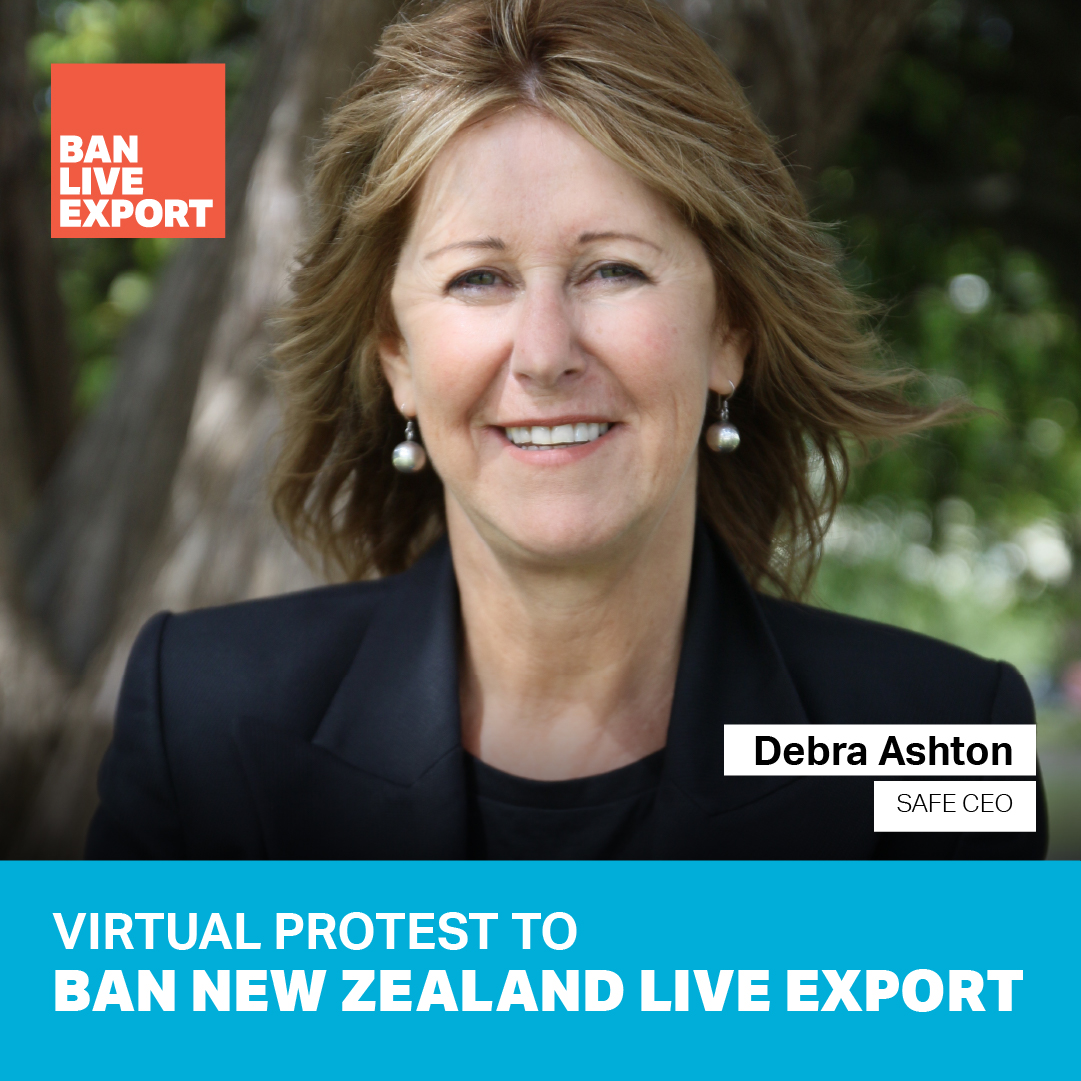 Debra Ashton
Debra has been SAFE’s CEO since 2018. Debra is a long-time animal advocate, her love of animals and a concern for the way they are treated led Debra to work with a wide number of groups wanting to make positive changes for animals. Previously, she served on the boards of both SAFE and Wellington SPCA and produced and co-presented an animal rights radio programme. 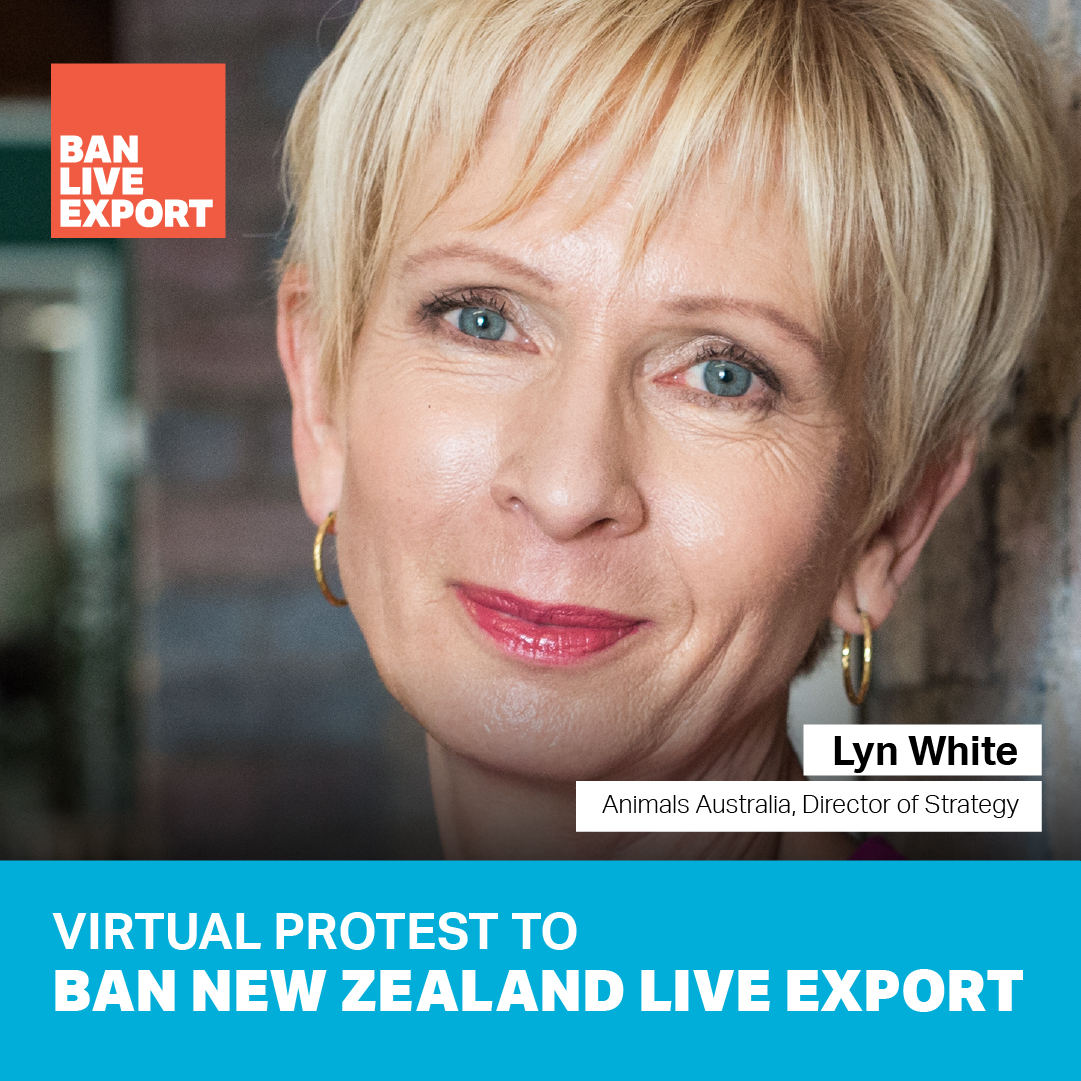 Lyn White
A former police officer, Lyn is one of Australia’s foremost animal advocates and lobbyists. Lyn has been investigating the live export trade since 2003, with evidence gathered resulting in significant regulatory reforms and unprecedented animal welfare advancements in a number of countries. For her significant contribution to animal protection, Lyn has been appointed a member of the Order of Australia and is a two-time Australian of the Year state finalist. 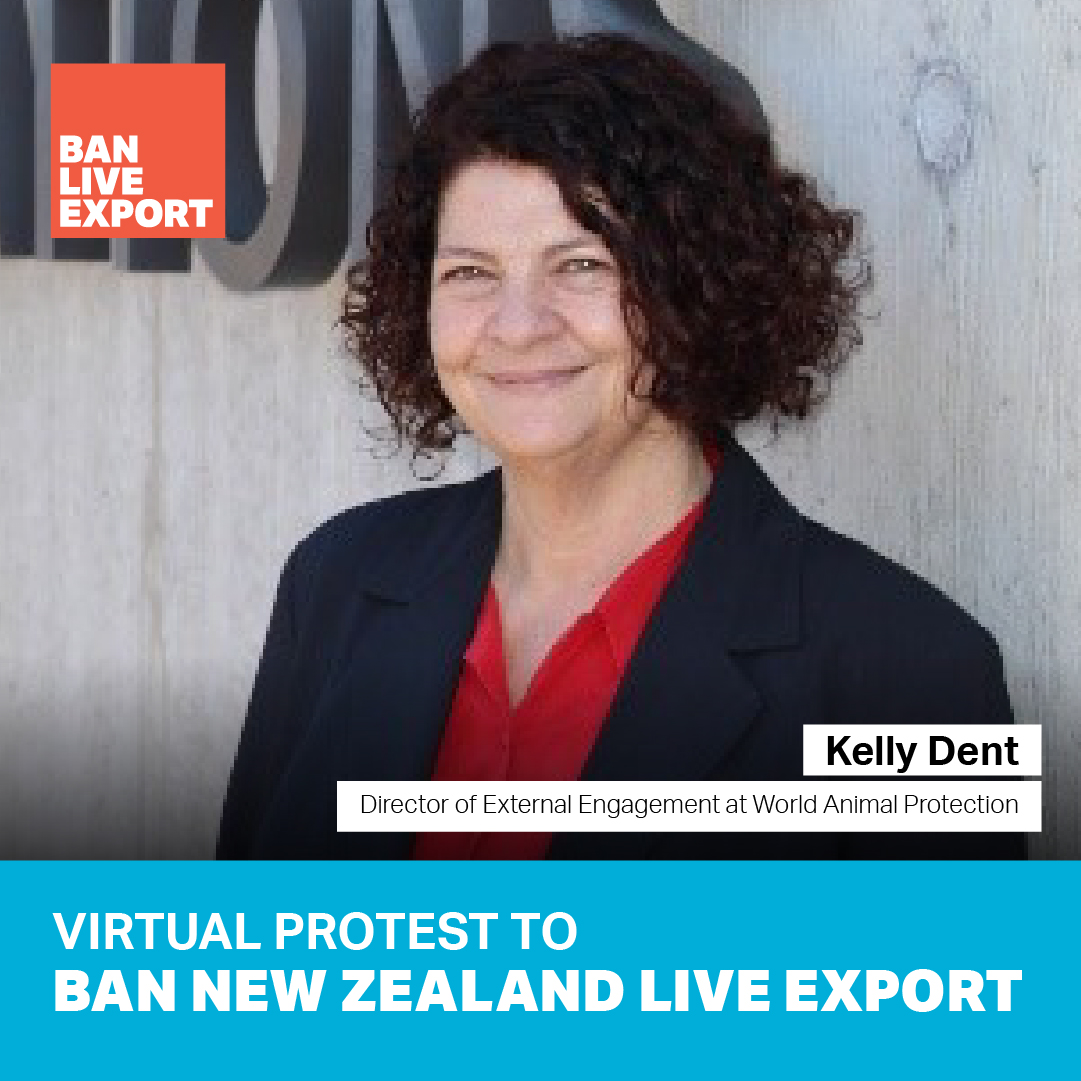 Kelly Dent
Kelly has 25 years’ experience lobbying and campaigning on climate change, poverty, corporate accountability, trade, labour and human rights around the world. At World Animal Protection she specialises in international animal welfare laws and company policy, which sees her play a lead role in the development of the Animal Protection Index – a ranking of 50 countries around the globe according to their legislation and policy commitments to protecting animals. 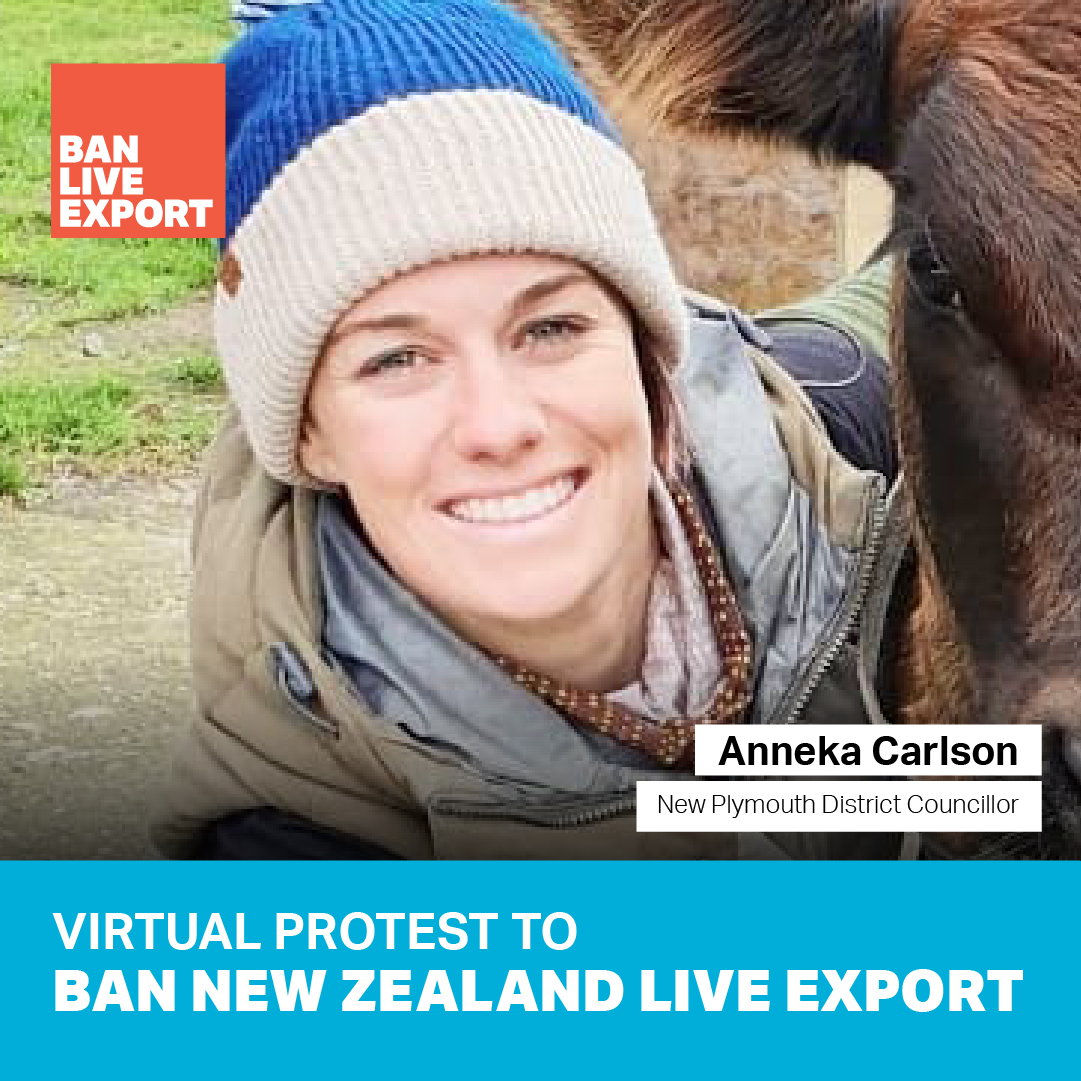 Anneka Carlson
As well as being the owner of an animal sanctuary, Anneka is a first-term New Plymouth District Councillor. She uses her platform to bring animal rights and in particular live export front and centre. She has always been a strong voice for animal rights and established Taranaki Animal Rights Group which helps raise awareness around animals issues such as live export. 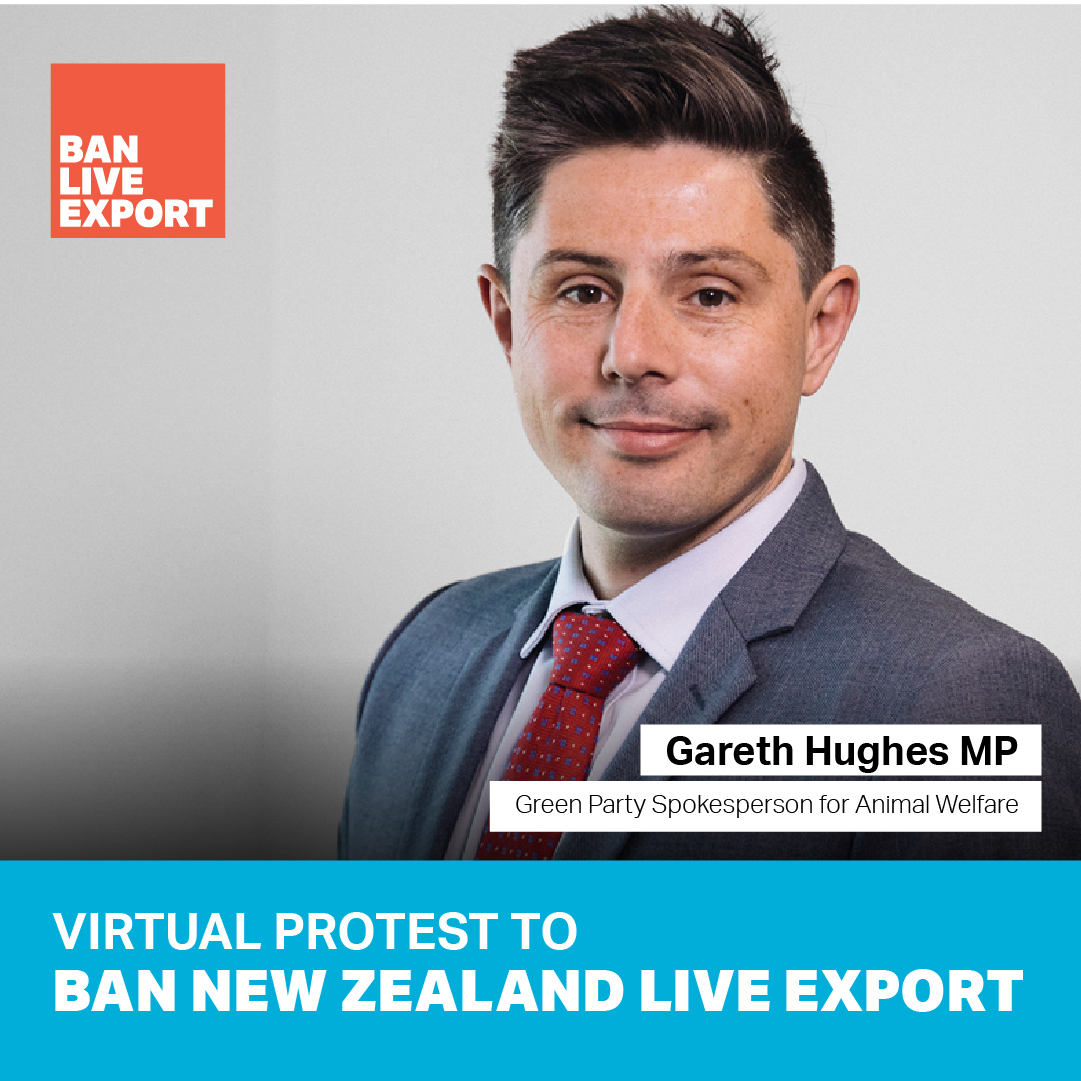 Gareth Hughes MP
Gareth graduated from Victoria University with a degree in Religious Studies, History and Politics. He worked for Greenpeace for nearly a decade and has done a stint on the Rainbow Warrior. Gareth entered Parliament in 2010, the youngest MP at the time. Gareth’s main focuses are cleaner energy, protecting the environment and embracing technology and innovation. He is the Green spokesperson for Animal Welfare and is currently the longest-serving Green MP. 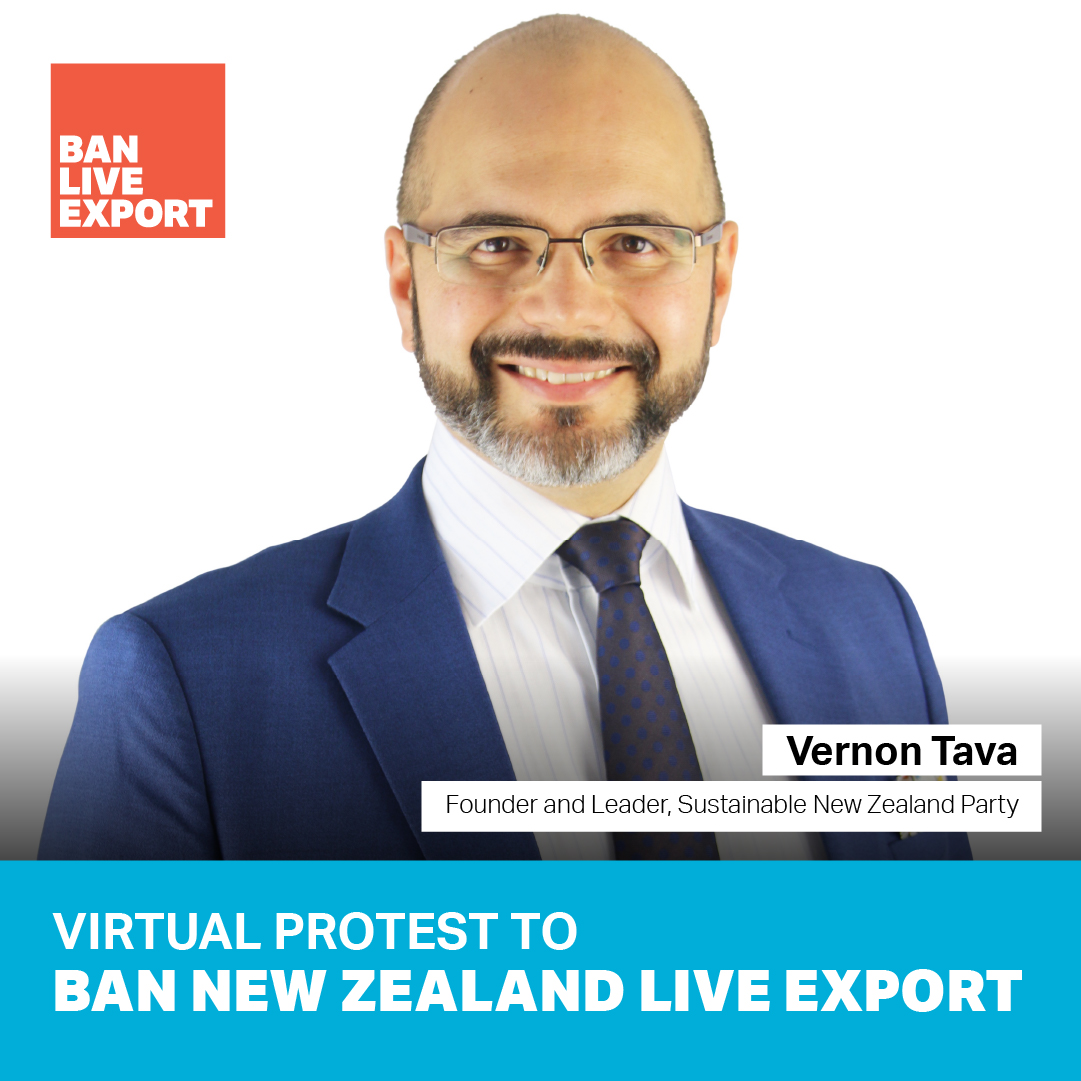 Vernon Tava
Vernon is the founder and leader of the Sustainable New Zealand Party. He is a practising barrister, specialising in criminal defence. He was elected for two terms as a member of the Waitematā Local Board of Auckland Council. He is a certified resource consent commissioner and holds a Master of Laws degree with first class honours in environmental law.
He founded the party out of a concern that, for too long, a vote for the environment has also meant a vote to the left of Labour and a grab-bag of fringe issues. Sustainable New Zealand has been formed to put sustainability at the centre of politics and save the environment from being just a left-wing issue. 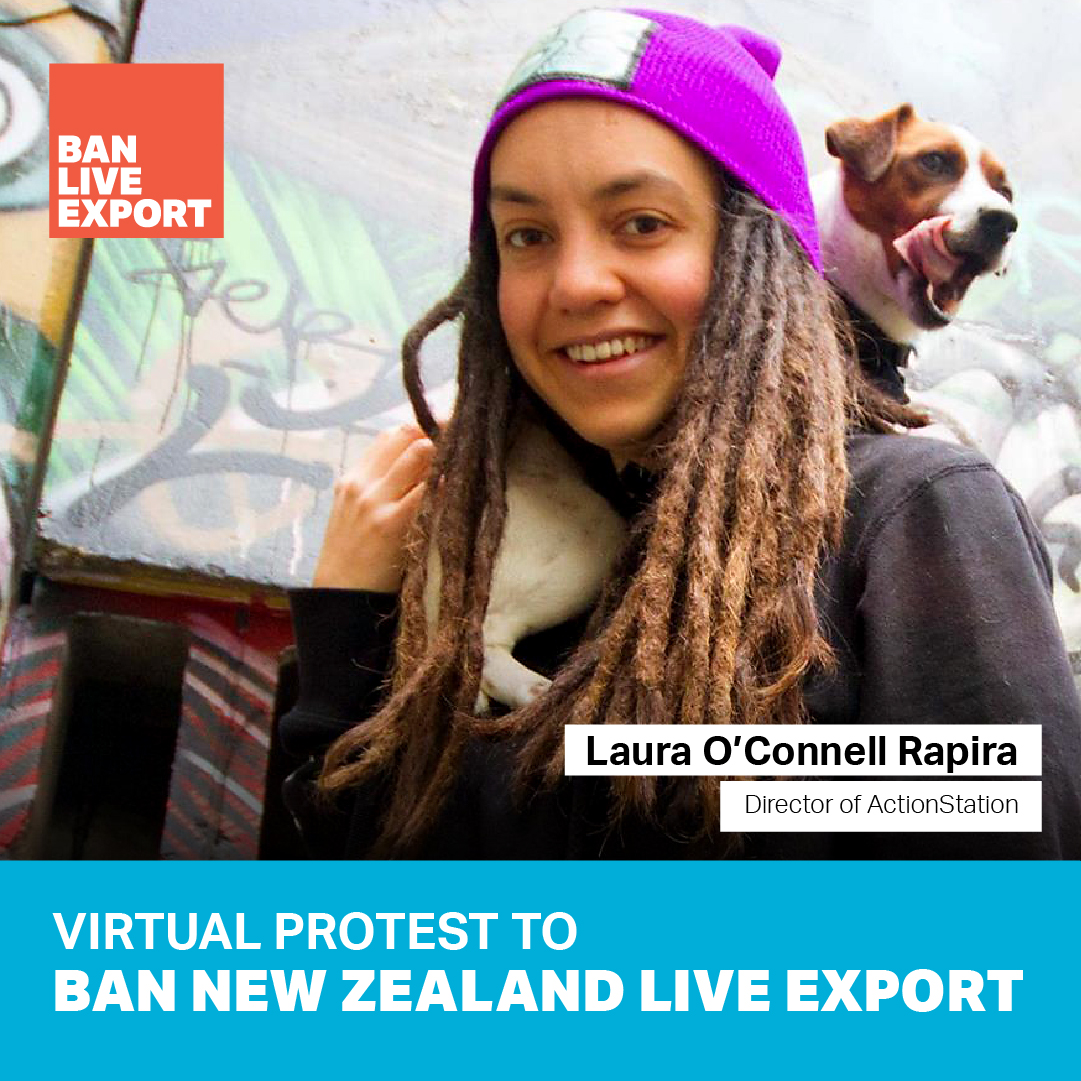 Laura O’Connell Rapira
Laura (Te Ātiawa, Ngāpuhi, Ngāruahine, Te Rarawa, Ngāti Whakaue) is the Director of ActionStation, an independent community action group representing over 100,000 New Zealanders acting together to create what we cannot achieve on our own: a society, economy and democracy that serves people and Papatūānuku. Laura is also a board member of JustSpeak, a youth-powered organisation working to transform our justice system and The Workshop, a think-and-do-tank that researches the best way to shift hearts and minds on important kaupapa. 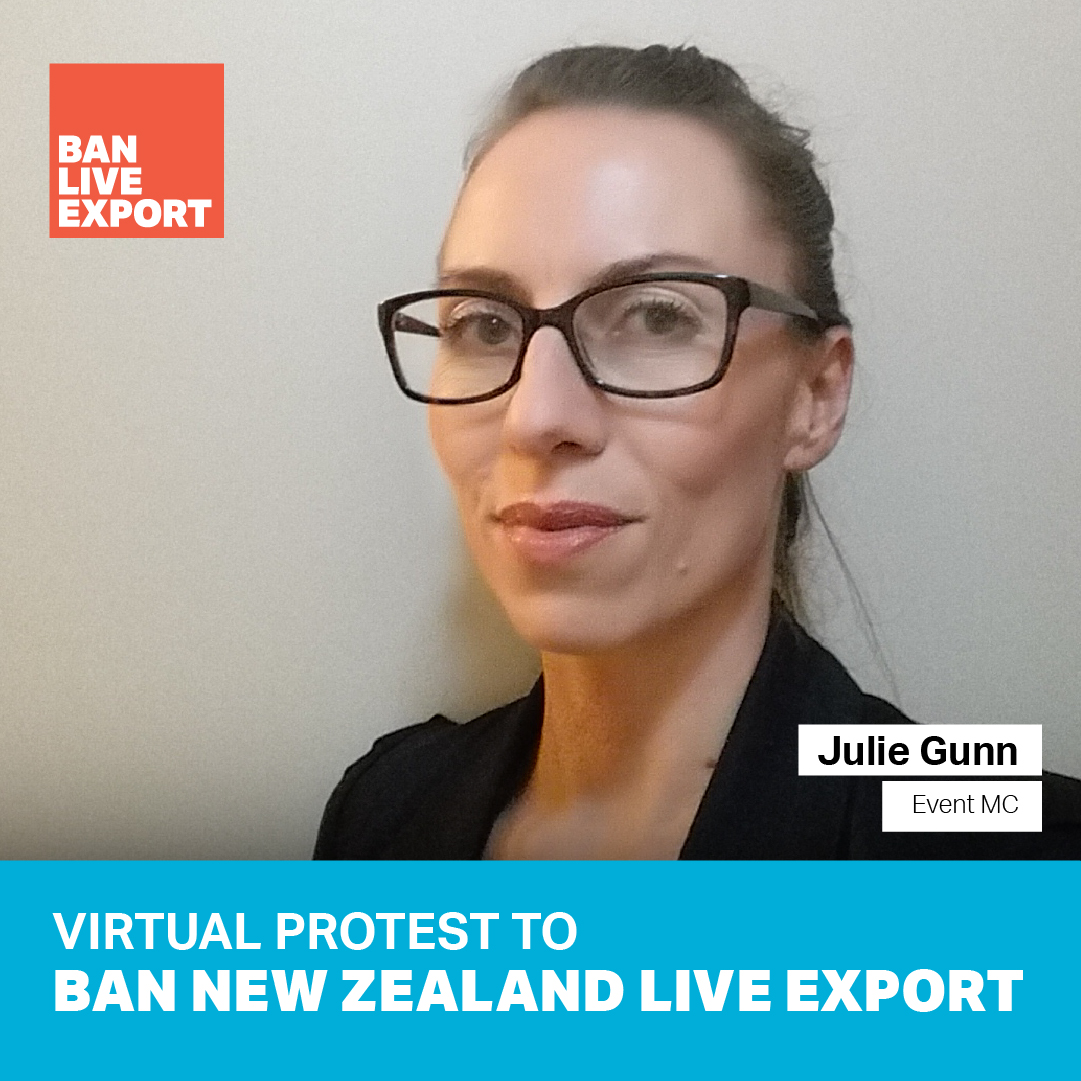 Julie Gunn
Julie is a well-known voice in Aotearoa New Zealand’s animal rights community and has been the MC for Vegan Food Festivals in Wellington and Auckland, the Stop Factory Farming march in Auckland, the annual Vegan Pie Competition, and for her award-winning radio show Animal Rights and Wrongs. You’ll find her advocating for animals wherever she goes!
Try plant-based!