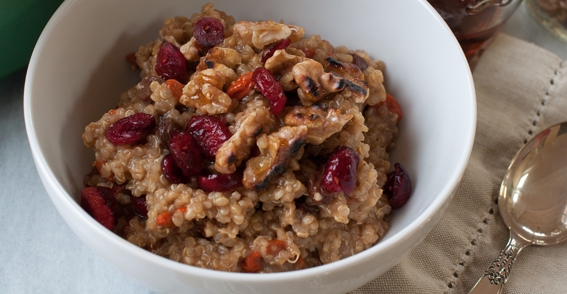 Heat a saucepan over medium heat and measure in the quinoa. Season with cinnamon and cook until toasted, stirring frequently, for about 3 minutes.

Pour in the almond milk, water and vanilla and stir in coconut sugar and salt. Bring to a boil, then cook over low heat until the porridge is thick and grains are tender, about 25 minutes. Add more water if needed if the liquid has dried up before it finishes cooking.

Stir occasionally, especially at the end, to prevent burning.

Mix in dried fuit and walnuts and serve.