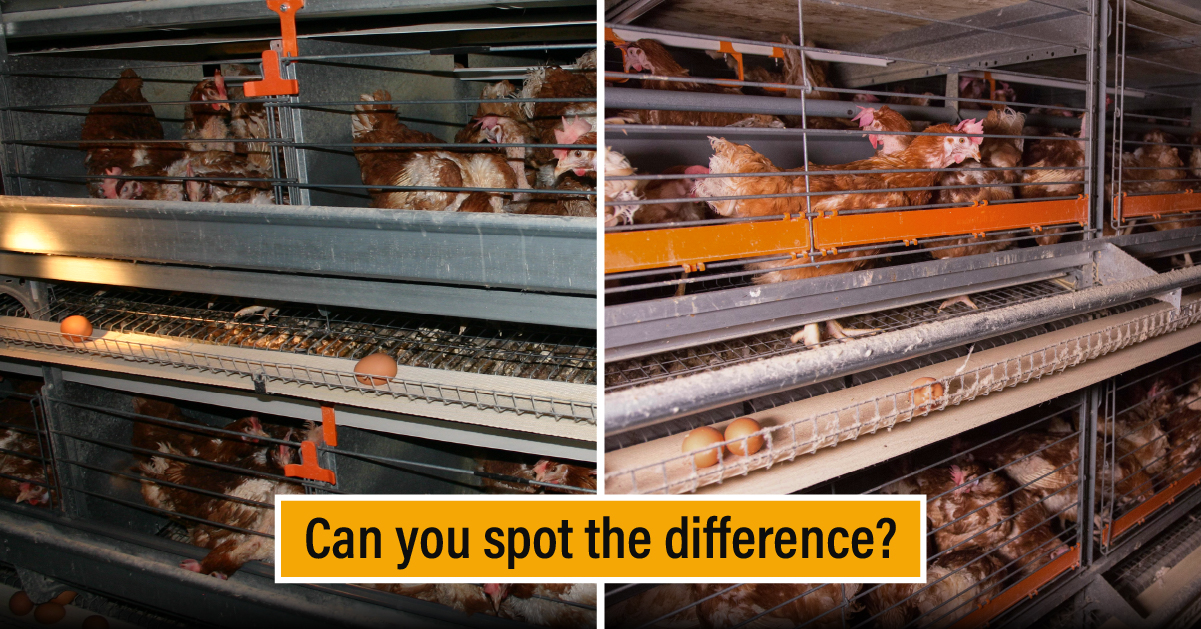 Scroll down to find out…

Sadly, one of these cages will be banned, while the other remains completely legal. 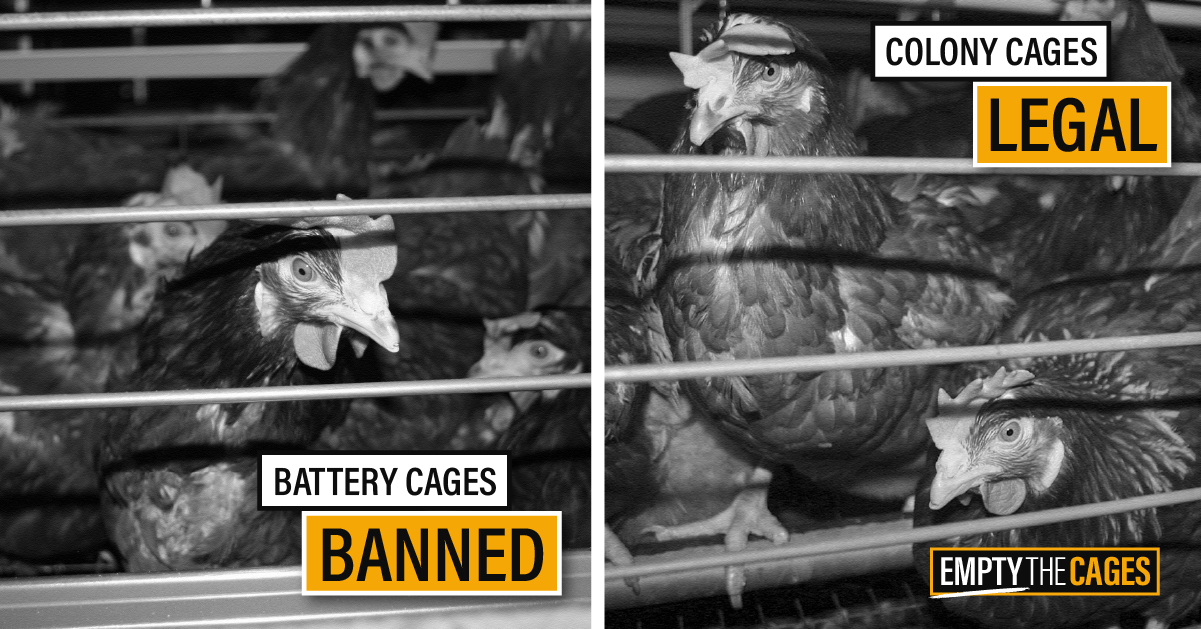 On the left is a battery cage which can house three to eight hens, providing just 550 square centimetres for each bird. Battery cages prevent hens from carrying out basic behaviours such as walking freely, nesting comfortably and stretching their wings. These cages will be illegal in New Zealand from 1 January 2023 as they breach the Animal Welfare Act 1999, which states an animal must be able to express normal patterns of behaviour.

Colony cages, which were introduced as a replacement for battery cages, can house up to 80 hens and provide just 750 square centimetres for each hen to live out her life (about the size of an A4 piece of paper). Colony cages are equipped with what the industry calls ‘enrichments.’ These include a small scratch pad, perches and one nest area (without nesting material). With so many hens in each cage, each hen must compete to access these so-called ‘enrichments,’ leading to aggressive behaviour and highly stressful living conditions.

Currently, over 1.2 million hens are imprisoned inside colony cages in Aotearoa. 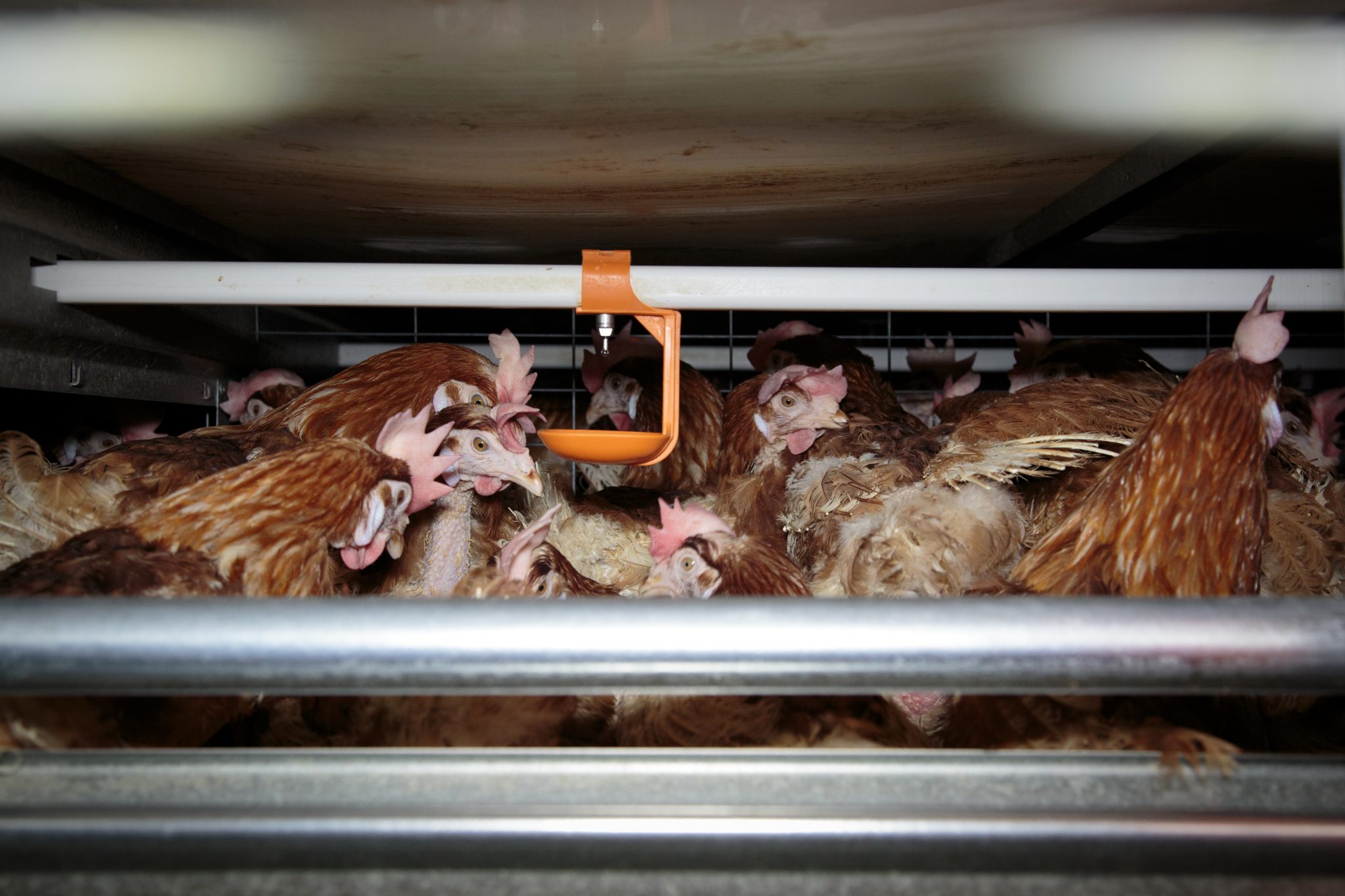 Hens are suffering inside colony cages

The quality of life for a hen has not improved inside colony cages. In this restrictive and overcrowded environment hens are faced with an increased risk of infection, brittle bones and pecking injuries from their distressed cage mates. Caged hens are predisposed to a host of diseases that can cause dehydration, starvation, death and even cannibalism. At about 18 months of age, a hen can no longer produce eggs at a high rate. She is then presumed unprofitable by the egg industry and is killed. Her natural lifespan would be up to 15 years.

Colony cages do not allow hens to express their normal patterns of behaviour. These include nesting, foraging, exploring, stretching and dust bathing. Hens perform these natural behaviours even when they are not needed for survival, and preventing these behaviours is harmful to their well-being.

The Animal Welfare Act 1999 requires that the physical, health and behavioural needs of animals be met. It is impossible to meet the needs of hens inside colony cages. 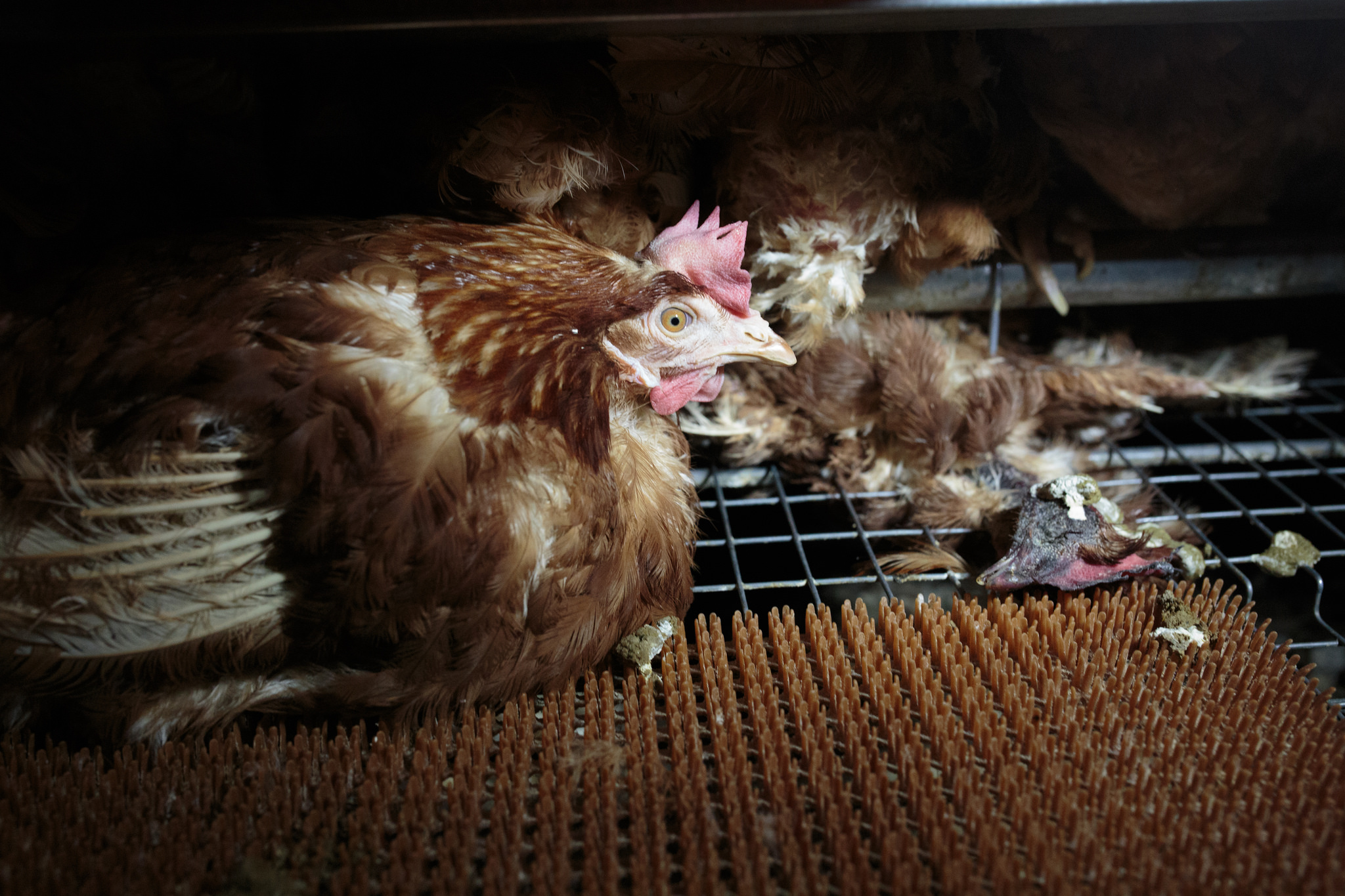 Image: A hen on a rubber scratch pad next to her deceased cage-mate inside a colony cage on a New Zealand farm.

The world is turning their backs on colony cages

Kiwis have already expressed their opposition to colony cages. A 2020 Colmar Brunton poll found that 76% of respondents did not support the caging of hens. In response to public expectations, all major supermarkets have committed to being cage free from as early as 2024, and more than 2,000 New Zealand businesses will abandon the use of cage eggs, leading the way ahead of Government.

Overseas, hens are being spared from a lifetime in cages. In June 2021, the European Commission committed to phasing out the use of cage systems across the European Union by 2027. This legislation will free over 181 million hens from cages. In the United States, nine states have banned the production and sale of cage eggs.

It’s time to empty the cages

Hens are highly intelligent, curious and socially complex animals who deserve the freedom to have a life worth living. It’s time to extend our kindness to hens and ban all cages.

During SAFE’s Political Panel for Animals 2020, The Minister for Agriculture Hon Damien O’Connor stated: “I wouldn’t be investing in colonies, and I’m sure no smart person would either.” It’s time to hold our elected officials accountable. We are calling on Hon Damien O’Connor to urgently ban colony cages in New Zealand. His aim for New Zealand to be regarded as a country with high animal welfare standards can never be achieved while hens are kept in cages.

Take action with us by signing the petition to free hens from cages in Aotearoa.

Together, we can free 1.2 million hens from crowded and unnatural colony cages, and create a kinder future for hens.