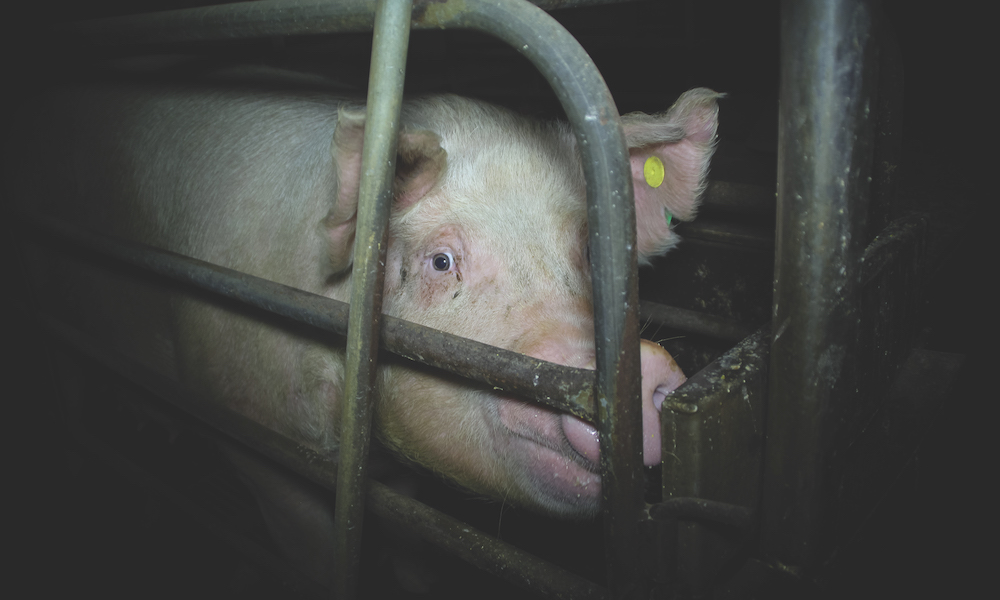 The simple matter of the law: pig welfare and farrowing crates

A potential end to the use of farrowing crates on pig farms has drawn battle lines between farmers and animal advocates. SAFE Chief Executive Debra Ashton explains why the legal and social license to confine pigs in farrowing crates has expired.

Our country’s leaders love to talk about animal welfare.

The welfare of farmed animals was included in the free-trade agreement we recently signed with the United Kingdom, a first for Aotearoa. It recognises that animals are sentient and that the protection and improvement of animal welfare are important trade objectives for both countries.

On the global stage, our Prime Minister, Jacinda Ardern, has raved about Aotearoa’s commitment to animal welfare, most recently in the United States on The Late Show with Stephen Colbert.

But animal welfare isn’t just a marketing slogan. It’s embedded in our legislation and determines the lived experience of the 160 million land animals raised for food in Aotearoa.

That said, if our business and political leaders want to trade off Aotearoa’s animal welfare credentials, then the obligations of the Animal Welfare Act 1999 must be met. And right now, the use of farrowing crates on pig farms is undermining our animal welfare laws.

Farrowing crates, which are used on about half of Aotearoa’s pig farms, prevent a mother pig from turning around or properly nursing her piglets.

In short, she can’t display normal patterns of behaviour – which is a requirement of the Act.

The New Zealand Animal Law Association and SAFE took this issue to the High Court in 2020. So when the Court ruled that the continued use of farrowing crates was unlawful and invalid, that was a clear signal that it was time for them to go.

As a result, the Ministry for Primary Industries and the National Animal Welfare Advisory Committee are now consulting on a new code of welfare for pig farming, which proposes banning farrowing crates or limiting their use to 72 hours.

This should not have come as a surprise to the pig farming industry. The Animal Welfare Amendment Act 2015 indicated that farrowing crates would have to be phased out. The Minister in charge at the time, National’s Nathan Guy said the Act gave farmers “the time they need to make changes.”

It’s been seven years and a ban on farrowing crates is now long overdue.

Putting aside the legality of farrowing crates, the argument for their continued use is tenuous, especially regarding piglet mortality.

Research from Sweden shows that the loose housing of sows, where mother pigs aren’t confined to farrowing crates, can provide for the needs of both mother pigs and their piglets.

The study found that smaller litter sizes can lead to reduced piglet mortality. In addition, the age, size and health of the mother, as well as animal-handling practices and housing, can have a positive impact on piglet survival. Selective breeding for good mothering skills, combined with good animal management, can lead to better results than farrowing crates.

These are not foreign farming systems. Approximately 45% of pigs in Aotearoa are farmed outdoors, the majority of which are free farmed.

This means a significant proportion of the industry is already raising pigs without the use of farrowing crates.

Consultation on a new code of welfare for pigs closes on 8 July, the outcome of which could spell the end to one of Aotearoa’s most controversial intensive farming practices.

Ultimately, farrowing crates provide negligible benefits for piglets compared with alternatives. Ending their use is entirely possible, and considering how much they restrict a mother pig’s movement and behaviour, highly desirable.

Pigs are widely considered to be smarter than dogs. We wouldn’t accept preventing a dog from turning around or properly nursing her newborn pups. We shouldn’t accept doing the same to a pig.

And when you factor in the legal obligations of the Animal Welfare Act 1999, and the science, it should be obvious that the social license to confine pigs in crates is nonexistent.

Farmers have an obligation to meet the needs of the Animal Welfare Act 1999. If they continue to confine mother pigs in crates, they will be breaking the law.

Make a submission on the pig code of welfare today.