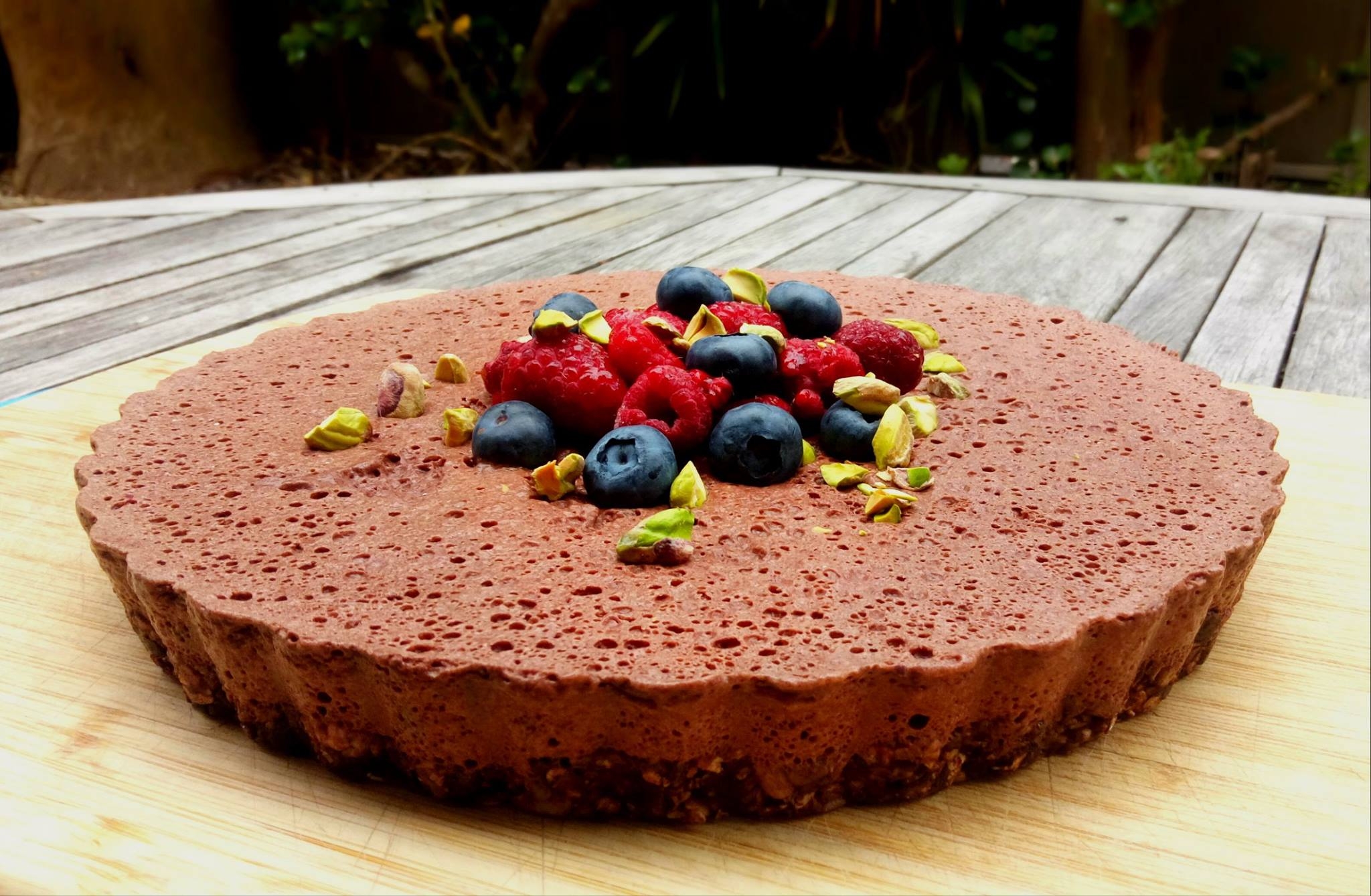 Pop your dates in a bowl and cover with boiling water. Soak for about 10 mins.

While they are soaking, pop the coconut, sunflower seeds, oats, cocoa powder and salt in a food processor. Drain dates and squeeze out any excess water, add to the food processor. Pulse until it’s all crumbly, and add a tablespoon of water at a time until it’s just moldable (if you press it to the side of the bowl it should stick there. You may only need 1-2 tbsp’s of water depending on how “wet” your dates were.

Lightly spray a pie, tart, flan or cake tin with cooking oil. Dump base mixture into tin and press it down firmly, covering the base of the tin. Pop into the freezer while you make the mousse.

Using a double boiler (a large glass bowl over a pot of simmering water works) melt chocolate along with the coconut cream, try not to stir too much until the chocolate is almost completely melted. Once it is, take the bowl off the heat and leave to cool slightly.

Puree your berries using a stick blender or small food processor. Set aside.

Pour aquafaba into a glass or stainless steel bowl – NOT plastic (very important). Just like egg whites, the bowl needs to be spotless, any grease or fat and this won’t work. Whisk using an electric beater until stiff peaks form. You should be able to tip the bowl upside down and the aquafaba stays put!

By now the choc/coconut cream should be just warm, not hot. Add the berries and give a little mix. Now very gently add the aquafaba a couple of tablespoons at a time, folding into the choc/coconut/berries after each addition. You want to be as gentle as possible and avoid knocking too much air out of the mixture. Once it’s all JUST combined, pour on top of your base (which you just removed from the freezer – duh!). Spread out a little until it’s even, cover the tin with a bit of paper or foil (avoid letting it touch the mousse) and pop into the freezer for about 3 hours*. When it comes out of the freezer it should only need about 15 mins to defrost in warm weather, so work quickly. Remove from the tin, top with berries and pistachio’s (if you want – but highly recommended) serve and EAT IT!!

*I popped it in my freezer and went out. I got home about 2-3 hours later and it was firm, but not frozen solid. But even if yours does freeze, it won’t take long to defrost!

Interested to
hear more?
The latest Recipes
News and Stories,
to your inbox.