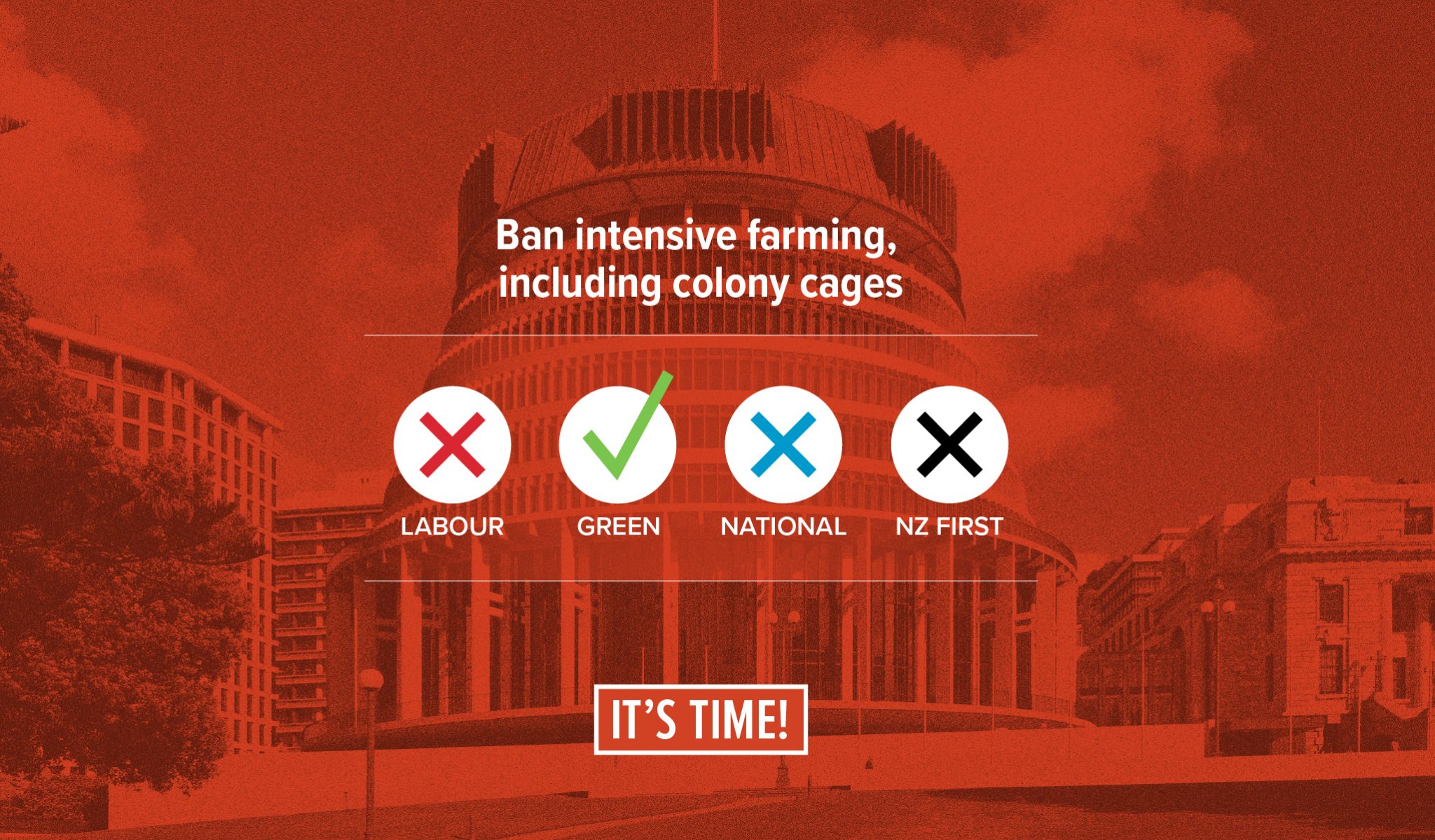 Getting animals on the agenda this election

Animal issues have fallen off the political radar in 2020, and there is no sign that any of the political parties are focused on making positive and significant improvements to animals’ lives. Colony cages will therefore only be banned after the election if animal activists step up to carry out a sustained campaign and pressure politicians to act.

Animal Agenda Aotearoa surveys the political parties on their animal policies before each election. In 2020 this survey reveals that Labour’s animal policies have fallen below where they were in 2017. In the leadup to the last election, Labour’s then-animal spokesperson committed to abolishing intensive farming, including colony cages. However, once Labour took office they went back on that promise and this election the Labour Party does not support phasing out intensive farming. The party has also dropped its support of a Minister for Animal Welfare.

The Greens have good animal policies but have not made animal issues a priority in coalition negotiations nor during their time as a confidence and supply partner. The Green Party supports banning intensive farming and freeing hens from cages, and it is pleasing to see that they have included animal welfare in their 52-page vision document, which will serve as the focus of coalition negotiations if they form a government with Labour after the election.

National scored only 2.75 out of 20 for their responses to the Animal Agenda Aotearoa survey. They do not support banning colony cages or phasing out intensive farming, and their policies do not show any commitment to making other improvements for animals.

Aotearoa has a 120-seat Parliament. This means that for laws to be passed, 61 votes in the House are required. Usually, this means that the backing of more than one party is needed to get policies through. That is why animal activists need to convince as many political parties as possible to free hens from cages. It is only by building coalitions of support that changes will be made for animals.

We need all political parties to commit to freeing hens from cages.

This year may be an exception to that, as Labour is currently polling so high that they would be able to govern on their own if that was the result on election day. However, many things can happen between now and then, so it is best to get as many parties as possible on board with banning colony cages and phasing out intensive farming to ensure that these changes are made.

More detailed information about the parties’ animal policies in 2020 can be found on the Animal Agenda Aotearoa website – animalagenda.org.nz.

Cat MacLennan is the Convenor of Animal Agenda Aotearoa.

Hens need your voice this election. Help us call on political parties to put animals at the top of their agenda and free hens from cages. Find out how here.