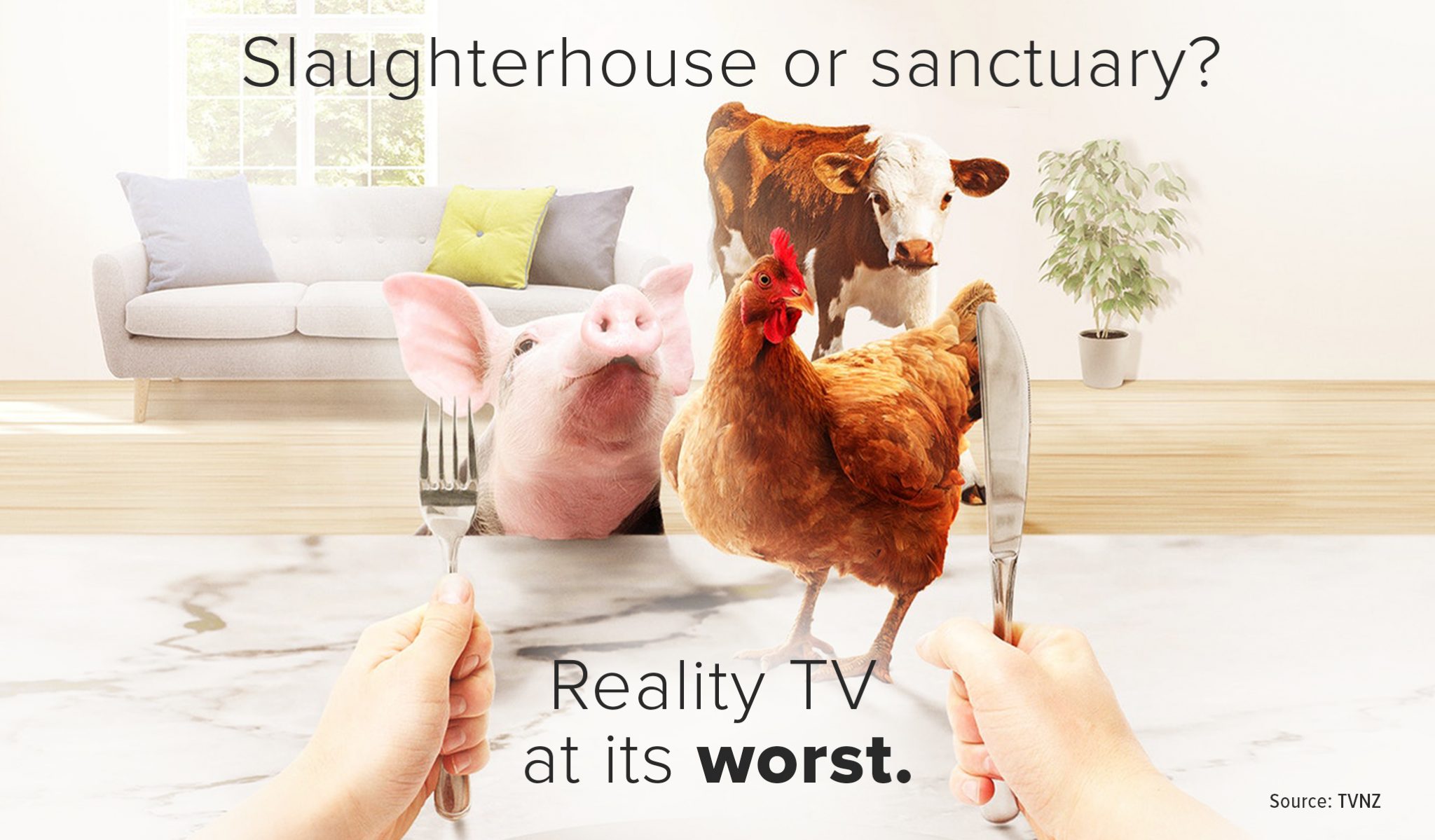 Slaughterhouse or sanctuary? – Reality TV at its worst

‘Meat the Family’ has replaced the delightful series ‘The Dog House’ on TVNZ 1. Last night, along with many other animal lovers who were expecting to watch a heart-warming show about dog adoptions, I found myself watching reality TV at its worst.

Meat the Family follows meat-eating families who must care for farm animals as family ‘pets’ for three weeks.  Then each family is faced with a decision – kill and eat the animals they have cared for and bonded with or save the lives of the animals.  To save the animals in their care from the slaughterhouse however, the families must commit to becoming vegetarian.  For some of the more carnivorous family members, giving up meat was simply unfathomable, meaning that we saw their chickens taken away in a van to be murdered then returned to the family as a neatly packaged corpse to eat. Cue crying children and parents frantically trying to justify why sometimes animal-loving adults ignore their emotions, so they don’t have to change their eating habits.

Killing animals for TV entertainment is not new.  However, Meat the Family directly confronts the viewer with their role in the death of an animal when they choose to eat meat. For that reason, it could be argued that it is perhaps less ‘entertainment’ and more an opportunity for self-reflection. It is hard not to examine your own behaviour and question what you’d do in a Meat the Family scenario. Ultimately though, the TV format fails animals. At the end of the hour, the viewer can conveniently switch off, and with no tools or information offered to help them make kinder choices in the future, we are left with nothing other than killing for entertainment.

The life and death of an animal should not ‘entertain’ us on a weeknight, and then conveniently be forgotten as we change the channel. New Zealand law recognises animals as sentient and so, regardless of how confronted Meat the Family makes the viewer feel, animals and their complex lives deserve more consideration than what can be fitted in between ad breaks. If the aim truly is to encourage us to reconsider our choice to eat animal products, then the ‘reality’ of the lives and deaths of the intensively farmed animals we buy in the supermarket in New Zealand needs also to be shown.

Have you been thinking about leaving animals off your plate? We have all of the tools to help you! Sign up for the new, updated Plant-Based Challenge today and receive delicious recipes, meal ideas, tips on eating out and more!