Recently, a brave informant came forward to share haunting stories of their experiences on board a live export ship. Over the last few weeks, we’ve shared their account in ‘True stories from a live export ship’ in our social media.

In this blog, you can read the informant’s story and view the social media posts, which describe loading the ship in New Zealand to unloading in a new country and the hellish journey in between. Here are the haunting stories told first hand by someone working in the live export industry.*

Firstly, the informant explained how the animals suffer from the moment they board the ship: “It takes time to load thousands of cows onto a ship. By the time all the cows were loaded, the cows on the lower decks were already standing in their own excrement.” 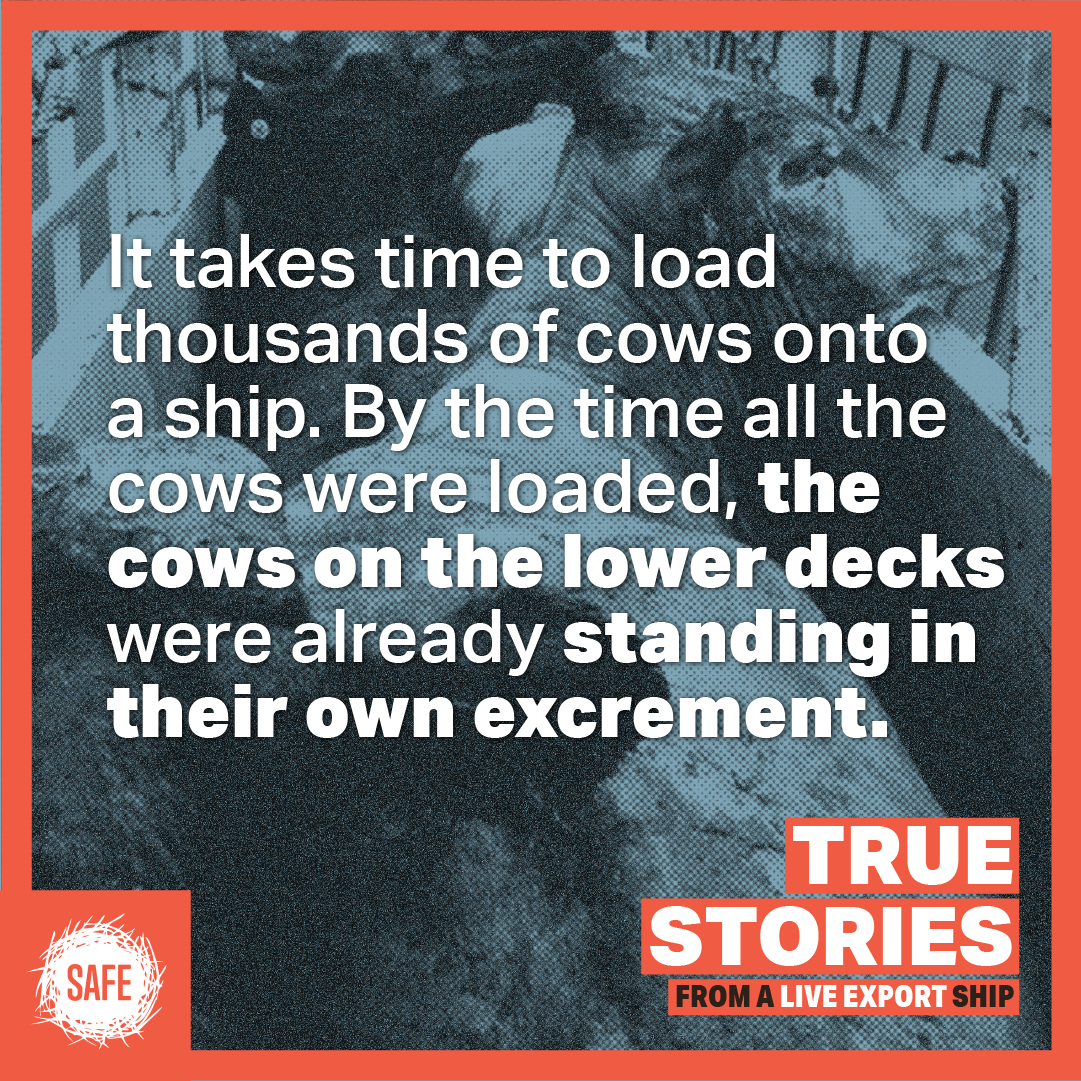 Crammed onto the ship

Next, the informant described how crowded live export ships are and the injuries animals sustain from the jostling and close confinement: “The cows were packed so tightly onto the ship that they couldn’t move. Some cows were lying on top of other cows [and others] rubbed against the pens.” 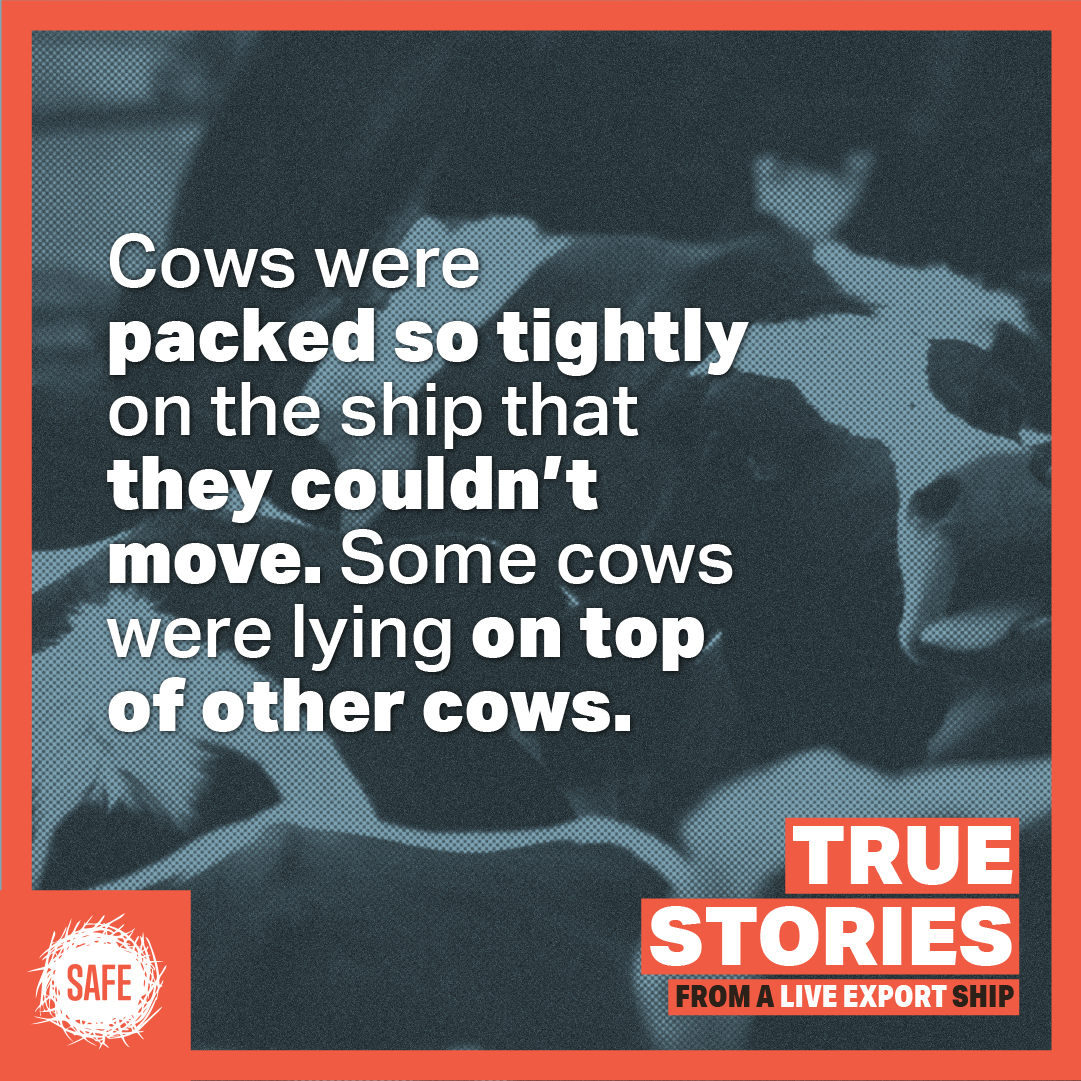 Life and death on the ship

One incident resulted in a cow dying during the voyage from New Zealand to China: “Two cows got their heads stuck under the bottom rails on the ship. One suffocated, the other survived.” 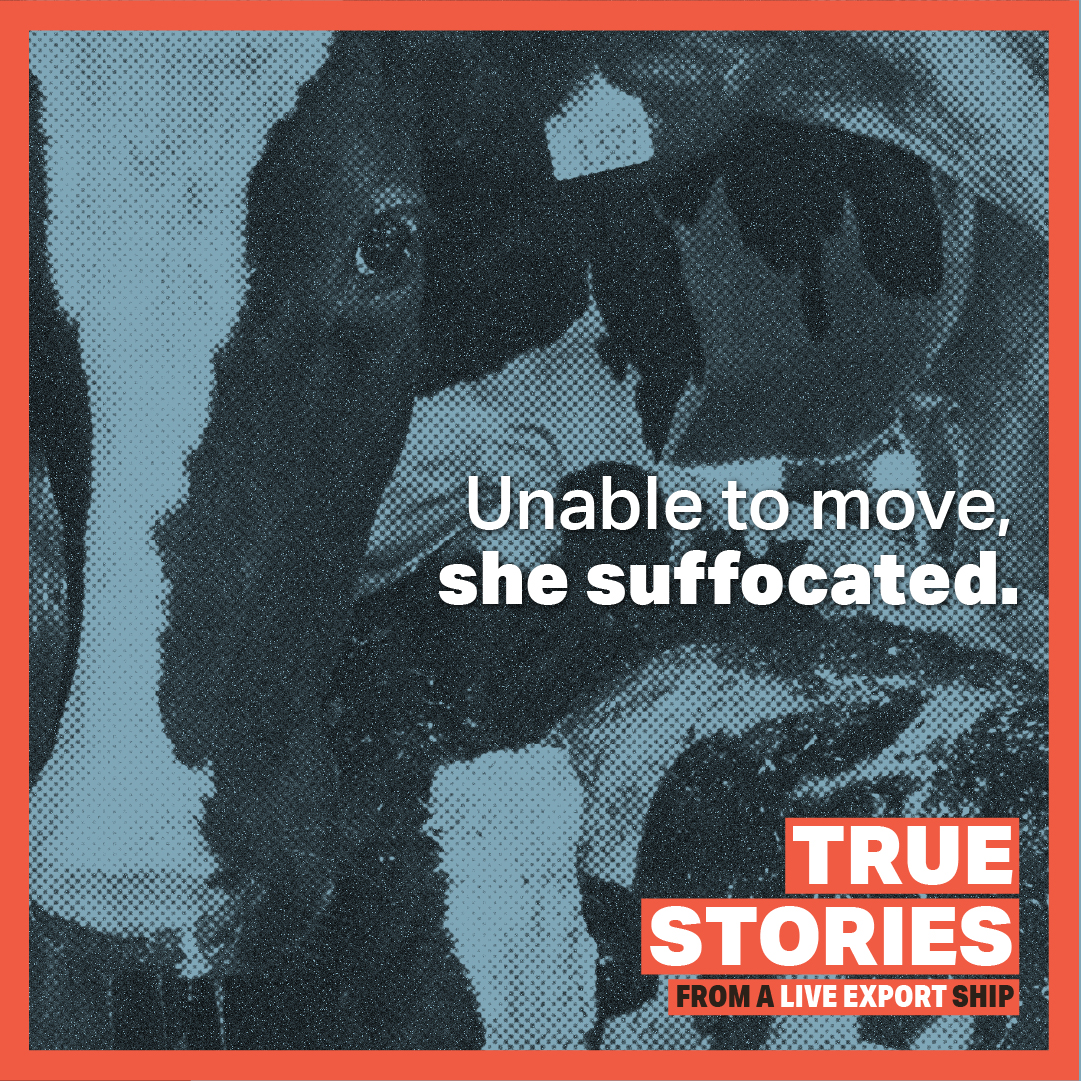 The informant shared the devastating reality for a calf born on board the ship: “A calf was born on the ship. She lost her mum for some time, but eventually found her again. Some of the crew wanted to keep the calf because she was so cute.” But that wasn’t to be. “The calf was shot by the vet and thrown overboard.”

Her tragic reality? She was born to die. 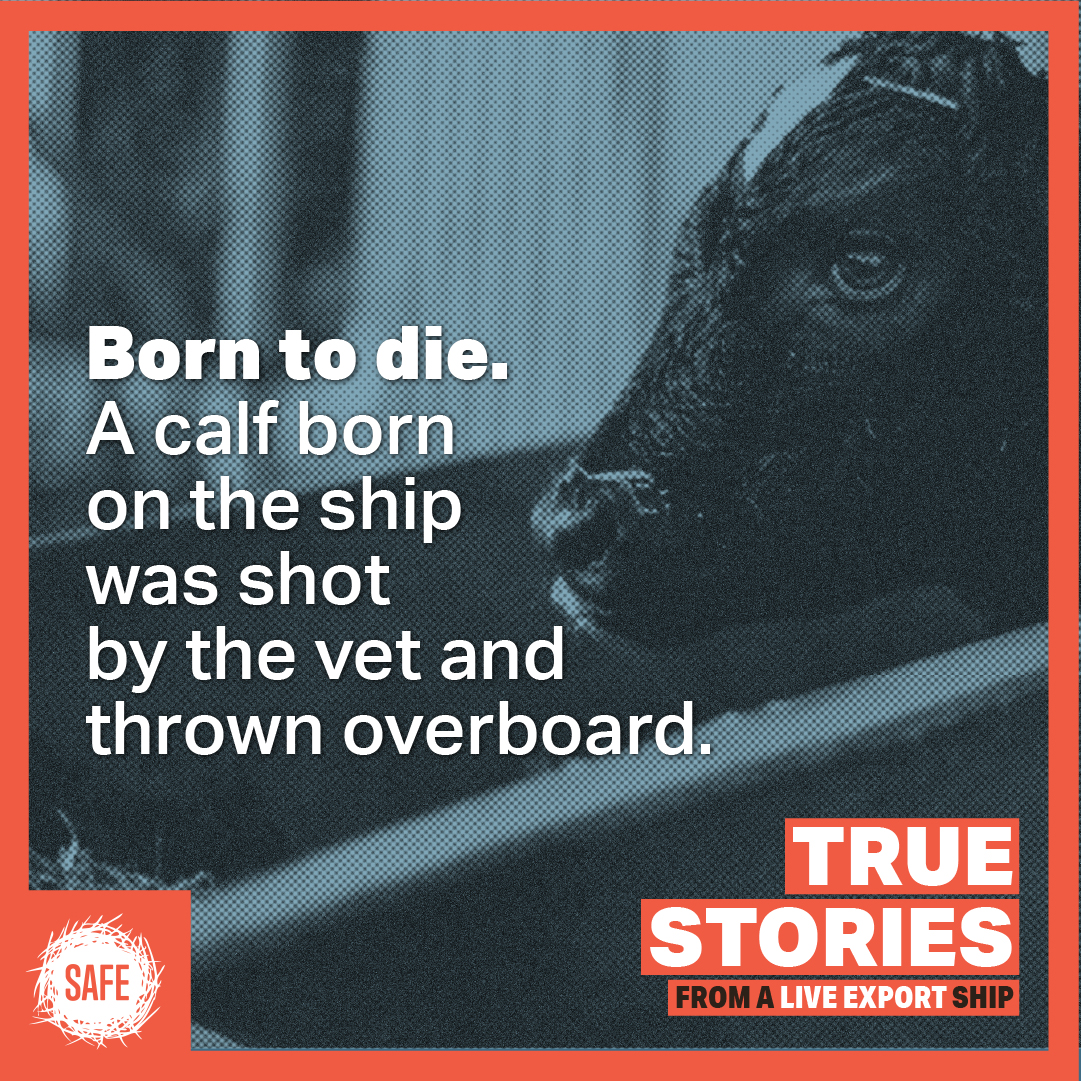 Live export not only causes suffering for the animals directly involved, but also degrades the marine environment: “I saw four lots of untreated effluent dumped into the ocean. This was particularly disgusting when we were in the pristine waters near New Caledonia.”

One can only imagine the devastating impact of this waste on the marine ecosystem, including the effects on the trillions of individual animals living in the ocean. 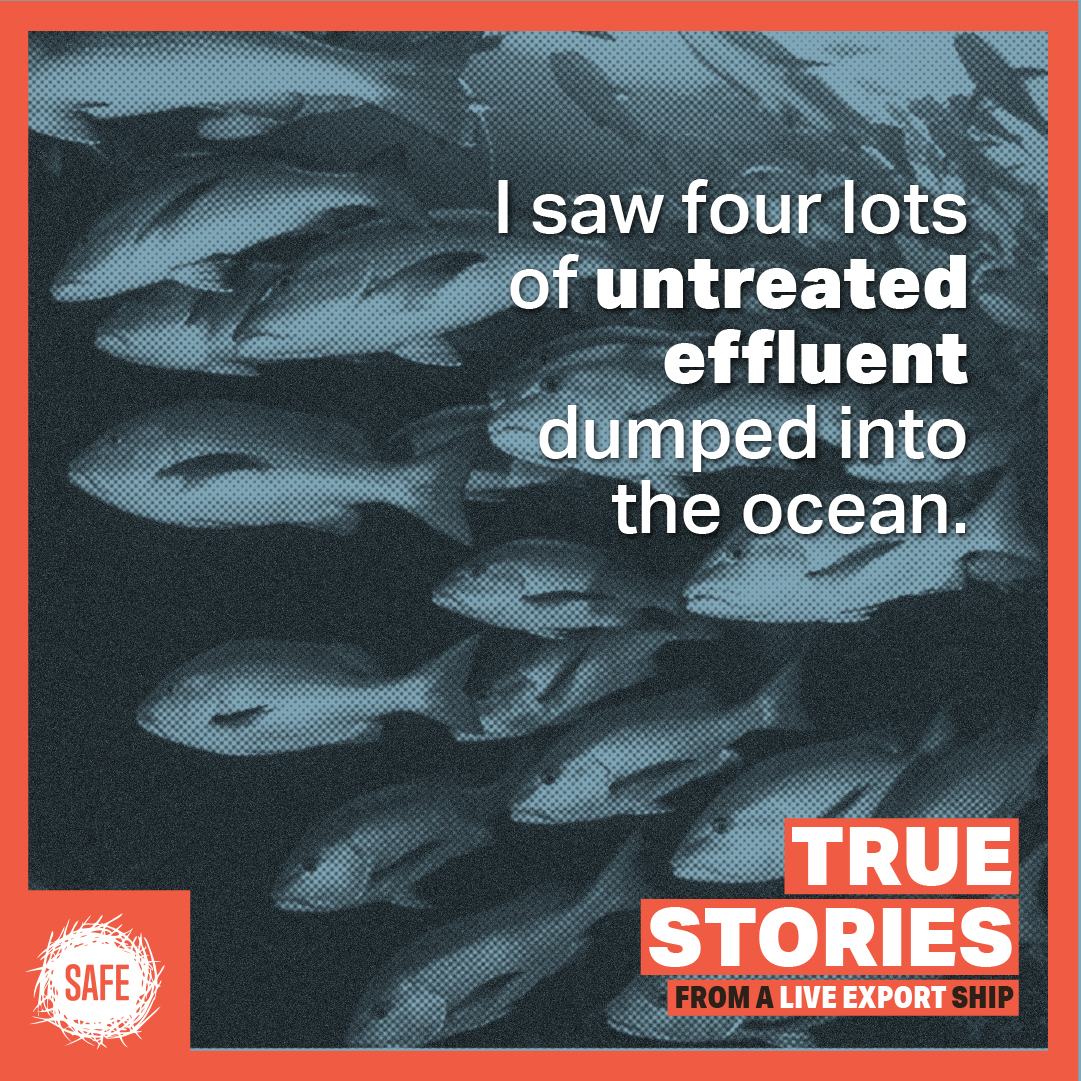 The informant’s story ended with the unloading of the cows from the ship in China: “The cows got really stressed when they were unloaded from the ship. One cow jumped out of the truck and was shot dead.”

The informant also told us that during unloading they informed the Ministry for Primary Industries (MPI) vet that there were visible signs of trauma to the cows’ bodies from the voyage – bruising on their hips and rumps from having rubbed against the ship’s hull. The MPI vet’s response? “Don’t worry about it – [they are] now China’s problem.” 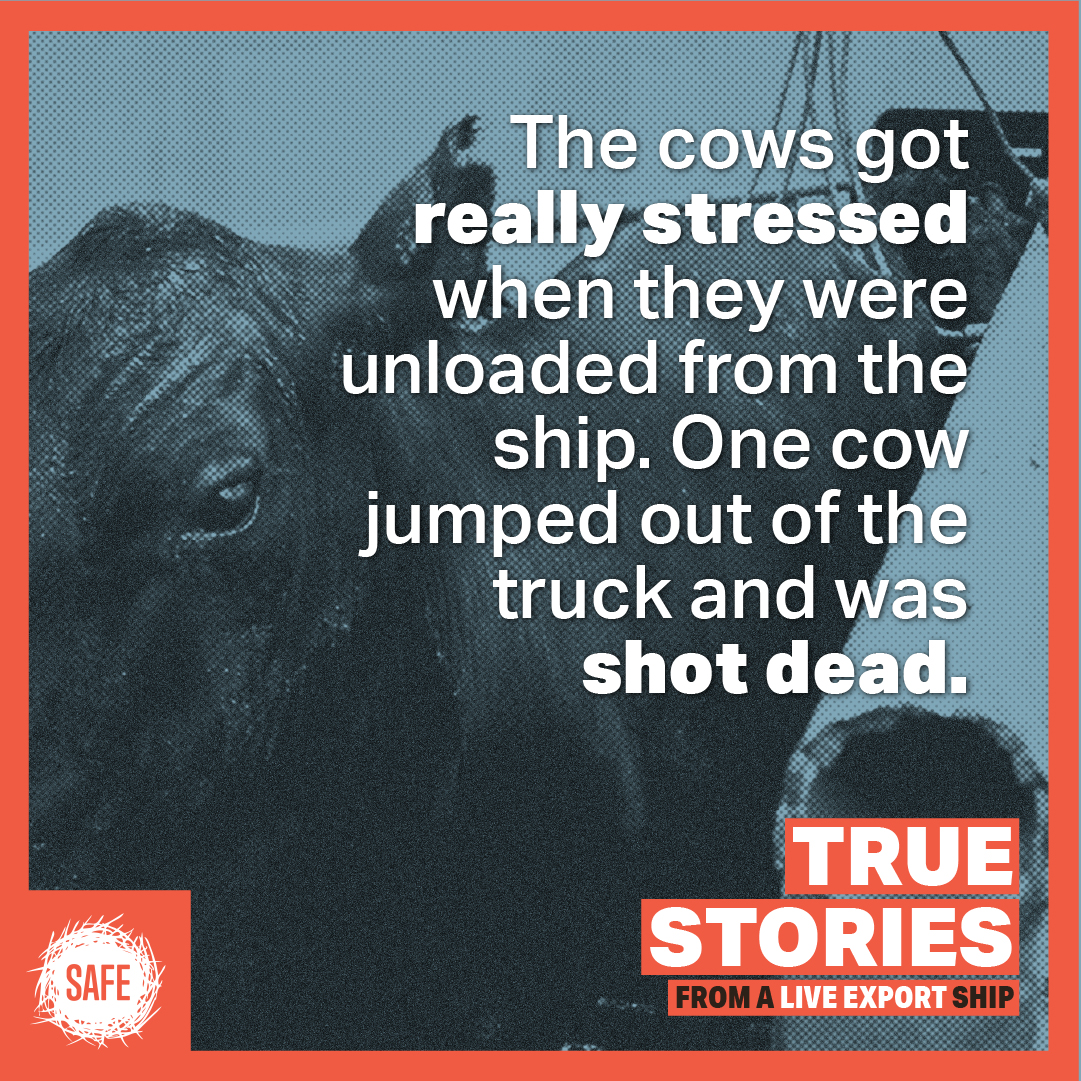 We would like to publicly thank the brave informant who came to us with these haunting accounts. They had nothing to gain from sharing their story, and everything to lose, should their identity be revealed. Their only motivation was to bring the grim secrets of live export to light, in the hope that this would bring us one step closer to immediately closing the door on this shameful industry for good.

What you can do to help

*To ensure we maintain the informant’s anonymity, some of the information provided to SAFE has been omitted from the blog.