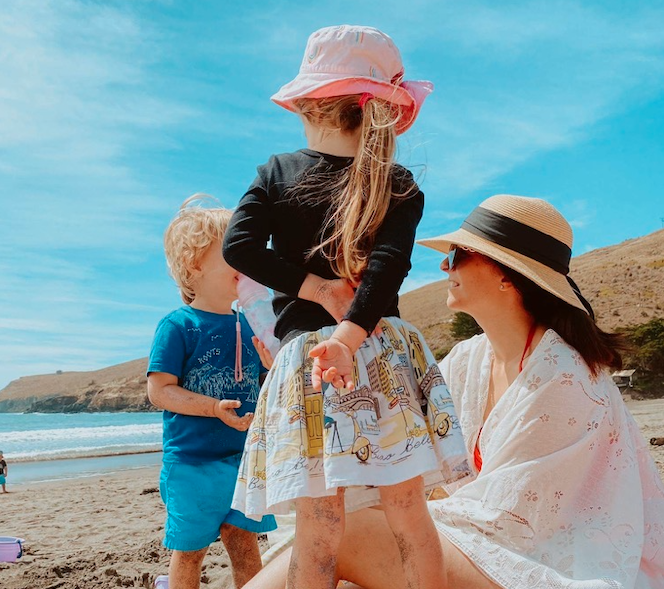 What is that blob on the beach?

One SAFE staffer recounts the beauty of summer days at the beach and the vast wonder it inspires in her and her tamariki.

There is nothing like summer days at the beach in Te Waipounamu (the South Island). Our special spot is a secluded southern bay. Sometimes we’re lucky and a gentle warm wind brushes our cheeks as we watch the waves lap into shore.

My tamariki, aged 3 and 5, have learnt a lot about the sea from this special place. Some days, my son is fascinated by the barnacles that have forever affixed themselves to the rocks. He brushes and pokes them with his little fingers, exploring. Other days, he’s content to spend an entire afternoon throwing rocks of various sizes into the little river that sits between the bay and the road. He examines their size, weight, and shape. Once he found one shaped like a heart!

When he’s feeling braver, we scavenge the rock pools for living treasures. At low tide, we can spy on the little fishes, star fish and crabs that hang out in their warm sanctuaries. Sometimes he’ll gently touch a bumpy star fish. Often, we just talk about how different they are from each other, their sizes and colours.

“Crab!” He urgently warns if one gets too close. “He’ll pinch your toes!”

My daughter wanted to take a star fish with her to live in the stream by the house. It was a great opportunity to talk about environments and how salt and fresh water are different, how different fishes thrive in one or the other, but some like the eels in the stream can do both, traveling vast distances and returning to their native streams to spawn. Aren’t they clever!

It’s not all life at the beach. Sometimes while I’m hunting for rubbish, I come across a dead seal or bird, but often the smell hits me before I see the body. There was one year where I counted 32 dead seal pups. When I rang DOC (Department of Conservation) they didn’t think it was out of the ordinary. To us, it was a massive toll that cast a shadow over the weekend.

We usually try to stay away from the seals, though sometimes we’ve had a close encounter. My children have heard us say to ‘never to get between them and the sea,’ but they’re still too little to be entrusted to navigate the caves where they hang out. They do enjoy climbing the big rocks and have become quite agile at it, but I always closely scan the area first.

Sometimes the presence of sea creatures punctuates a special moment.

Once when a friend was visiting from Canada, and we had a brilliantly frigid swim. It was in keeping with our homeland’s infamous ‘Polar Bear Plunge,’ a dip into icy waters. We stayed in well beyond the point of our fingers and toes going numb, but we didn’t care – the ocean was vast, the sky was blue. As I looked down at my tingly limbs, a school of medium-sized fish swam around us, making the water sparkle.

Another day, my daughter came running towards me. “Help! Help!” her little voice yelled. I could see a blob on the beach. When my husband and I got closer, we saw a translucent octopus washed up on shore.

We both hesitated for a moment, we’d never encountered a real-life octopus. We parked our fear, then did what needed doing. The children watched in awe. We simply couldn’t leave her to the birds. It took us both to carry her back out to sea.

I’ll never forget her soft squishy tentacles. Her eye looked at us wonderingly; Were we friend or foe? She floated a while in the tide before she was strong enough to slip away under the waves.

As the family comber, each trip to the beach entails picking up pieces of the many things that don’t belong. Mostly broken plastic and the many, many bits of netting and other fishing debris. These often get tangled around sticks, rocks, bones.

I’ll never forget the time my brother-in-law found a shark attached to fishing rod. We were letting the waves crash on us, and this brave fellow (the shark) swam right up to him. The shark had patiently allowed him to remove the painful hook from their body. Who knows how long they were suffering? There were no people fishing in sight.

My tamariki will find rubbish too, although never attached to a shark. They are always very proud of themselves when they do. They run up to me saying in their singsong voices, “I got something for you” as if what they held was a treasure. In some ways, it helps them develop a keen eye for detail. But there is a greater lesson I’m hoping to impart, that this place is precious. Their real gift to me is that they are learning to care for it and those who call it their home.